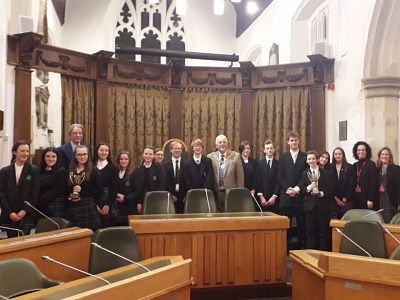 The East Kent finals of the ESU National Public Speaking Competition for Schools took place at Canterbury Guildhall on 7th February 2019 in the presence of the Lord Mayor, Lady Mayoress and an audience from our Club and the English-Speaking Union.

Here, Noel Ensoll from the ESU kindly provides us with a report. Many congratulations to all the winners!

The competition, run by the English-Speaking Union (ESU), attracts 350 schools every year. It is designed to give students from years 9, 10 and 11 their first experience of public speaking. Schools enter teams consisting of a Chair, Speaker and Questioner. Each round pairs a Chair and Questioner with a Speaker from another team.

The winning team was St. Edmund’s School Team 2. The round, ably chaired by Alexander Armstrong, scrutinised the argument put by Natalie Chwalibogowski of Folkestone School for Girls,  that ‘A government’s main priority should be saving the environment’. St. Edmund’s questioner, Isobel Wanstall, won the award for Best Questioner with her ability to listen and draw out the speaker’s arguments.

The runners-up were Folkestone Girls’ year 10 team, and their Chair Bella Martin won Best Chair for her efficient control of a discussion as to whether ‘Children should be encouraged to start earning their own pocket money as soon as possible’. Olivia Binfield of St Lawrence College won best Speaker for a lively defence of the idea ‘Be a vegan and save the world’, which inspired some pointed questions from Rotarians worried about their dogs’ diets. The Lord Mayor presented the trophies, and said how much he had enjoyed the evening.

Dr Margaret Griffin, President of the Rotary Club of Canterbury, commented on the quality of the research done by all the speakers. George Metcalfe, Chair of The ESU in East Kent, closing the meeting, expressed optimism that the students would be the politicians, law-makers and opinion-formers of the future and urged more schools to join the event.

The winners are invited to the south-east regional finals at ESU headquarters in London on 16th March, to compete for a place at the national finals at Churchill College, Cambridge, on 22nd April.