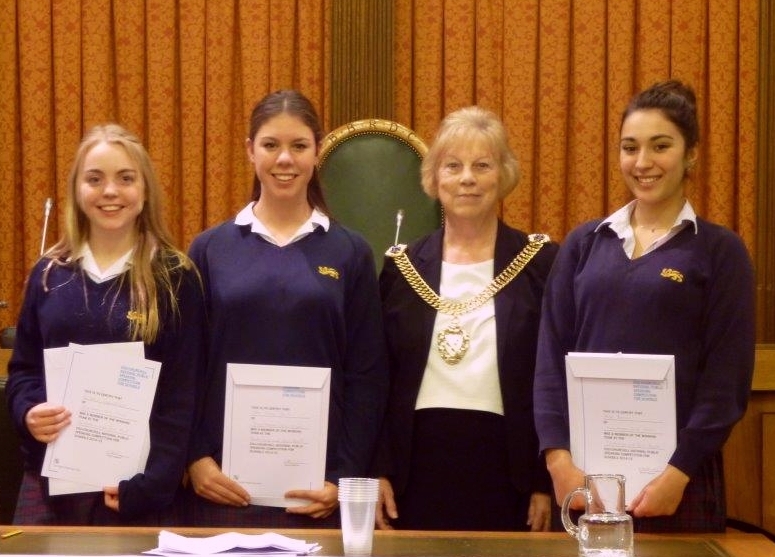 photo by Jenny Anderson, click or tap to enlarge

The Guildhall at Canterbury was the venue for the East Kent final of the Schools Public Speaking competition organised by the English Speaking Union in association with the Rotary club of Canterbury. Teams from the Dover Grammar School for Girls, Dover College, Ashford School, Simon Langton Girls School of Canterbury, Sir Roger Manwood’s Grammar School of Sandwich and two from the Folkestone School for Girls competed for the Brett cup and the chance to go forward to the Regional final next month.

The photo above shows (left to right) Cordelia Sigurdson, Ella Tester-Smith and Priya Brown, all from Simon Langton Girls School, with Lord Mayor Ann Taylor who presented the awards.

Each team of three comprised a speaker, a questioner and a chairperson who spoke and debated on a diverse set of subjects chosen from a list provided by the English Speaking Union. These ranged widely and included among others, topics on Nationalism, British Empire, Image in music, and Mixed teams in Sport, and provided for some interesting discussion with all teams performing to a high standard of excellence.

The English Speaking Union has a mission to promote International understanding and human achievement through the English Language and this competition is very much a part of that mission. The Rotary club of Canterbury is pleased to be supporting the ESU in their aims and to provide the Brett Cup.