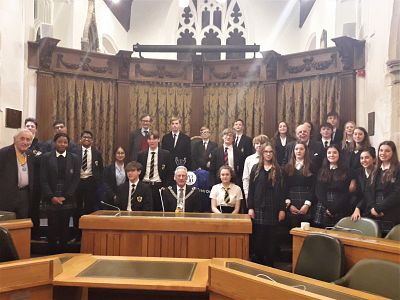 Well done to all who took part in the East Kent Finals of the ESU National Public Speaking Competition for Schools - and congratulations to the overall winning team, Folkestone School for Girls, plus other winners!

Our Club has helped host the competition, run by the English-Speaking Union (ESU), for a number of years with support from our vocational team and Inner Wheel. This year the competition was held yet again in Canterbury's historic Guildhall in the presence of the Lord Mayor and with an audience consisting of some members from our Club, the English-Speaking Union, and students and teachers from participating schools.

It was an excellent competition with, as usual, a range of topics covered, including human rights, fiction, new year's resolutions, education policy, the private lives of public figures, sexual orientation and religion, and NHS funding.

A total of eight teams from East Kent took part: two each from Sir Roger Manwood's School, Folkestone School for Girls and St Edmund's School, with other teams from Dover Grammar School for Boys and The Canterbury Academy.

Each team consists of a Speaker, a Questioner and a Chair, with the competition itself taking part in a number of 'rounds'. During each of these a Chair and a Questioner is paired with a Speaker from another team.

The overall winning team was Folkestone School for Girls;  they will take part in the South-East Regional Finals in London next month at ESU Headquarters. The winning Speaker was Joseph Morrison Howe of the Sir Roger Manwood School who spoke on the topical topic: "The private lives of public figures should be open to public scrutiny". The winning Chair was Bella Martin of Folkestone School for Girls, and the winning Questioner was Beatrix La'Da of St Edmund's School.

Past President Viv Pritchard, one of the audience members on this occasion, said it was a very enjoyable evening - "All the participants acquitted themselves very well and were a credit to their schools," he added.

The ESU competition, which gives year 9, 10 and 11 students experience of public speaking, attracts hundreds of entries each year. This year's national finals will be held in April.

Picture: All the teams taking part in the event, together with the Lord Mayor of Canterbury, Cllr Terry Westgate (centre), our President Elect, Alan Mepstead (far left) and Organiser of the Canterbury & East Kent Branch of the ESU, Noel Ensoll (back row) and Chairman of the Branch, George Metcalfe (near the centre left of the picture). Picture credit: Viv Pritchard/Rotary Club of Canterbury.