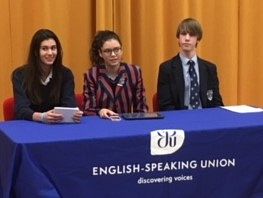 Our Club has supported this excellent competition for some years, with Rtn Alan Mepstead, who is chair of our Vocational Committee, organizing our Club’s input.

The two heats for ESU's East Kent branch took place on Tuesday 28th and Thursday 30th November. Another member of our club, Rtn Brian Dobinson, and Alan’s wife, Dee, served as judges at both events while Alan acted as timekeeper.

The first heat took place at The Folkestone School for Girls, where the audience included teachers, parents and pupils - plus our very own Rtn Nan Miller. Five teams competed - two each from The Folkestone School for Girls and St Lawrence College, Ramsgate, and one team from Sir Roger Manwood’s School. The two Folkestone teams and one of the St Lawrence teams won through to the branch finals. Topics discussed included “Is the pen still mightier than the sword?” during which we discovered the “pen” includes email, and “Is there more to Paddington Bear than marmalade?” which converted the judges to wanting to go to see the film “Paddington 2”, thanks to the depths of insight the students conjured from the ursine hero.

The second heat took place at St Edmunds School Canterbury and was attended by our President Sharon Jordan and Past President Geoff Goodban, as well was parents, teachers and pupils. Two teams each from Ashford School and from The Abbey School, Faversham and one team from St Edmunds took part. Both teams from Ashford and the St Edmunds team won through to the branch finals. Subjects included “Why are we so bad at dealing with waste?”, “Have the wealthy lost sight of the need to help the poor and disabled?” and “Should we all have the right to delete our digital past?” The judges had great difficulty in deciding between the three best speakers, but eventually came down in favour of Alfie Hutchinson from Ashford (a young politician in the making, no doubt) who managed to persuade the judges that Trident is worth the money - but only by the narrowest of margins against the highly charismatic Kimberly Joe-Ejim, also from Ashford, who urged us into nightclub culture. Our President briefly addressed - and praised - all the teams that took part.

The Final for the East Kent branch of the English Speaking Union’s public speaking competition for schools will take place on Thursday 8th February 2018 from 5 pm at The Guildhall in Canterbury. We hope lots of Rotarians will attend, knowing the audience is very important for those learning to be a public speaker!

Picture: Some of the participants in the heats. Picture credit: Melanie Caiazza, St Edmund’s School.