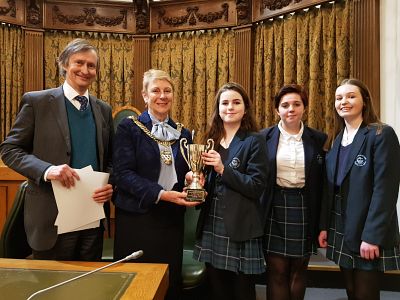 Youngsters from Canterbury, Folkestone, Ashford and Ramsgate had plenty to talk about during the Branch Final of the English Speaking Union’s Schools Public Speaking Competition for Schools on Thursday evening.

Topics ranged from the Trident missile to nightclubbing.

Year 9-11 students from St Edmund’s School in Canterbury, The Folkestone School for Girls, Ashford School and St Lawrence College in Ramsgate took part in the annual event, which was held at the Guildhall in Canterbury and opened by the English Speaking Union’s Canterbury & East Kent Branch Organiser, Noel Ensoll.

Presentations were kicked-off by Madeleine Brown (Folkestone Girls Team 2), whose topic was: “Are we growing into an ever more angry society?” Subsequent topics discussed were: “Is Trident worth the money we spend on it?” (Alfie Hutchinson, Ashford School Team 2); “Can the world cope with rising population levels?” (Olivia Binfield, St Lawrence College); “Should our nightclub culture be encouraged or curtailed?” (Kimberly Joe-Ejim, Ashford School Team 1); and “Dunkirk – a crushing defeat or a proud military moment for the Allied forces?” (Folkestone School for Girls Team 1). Poppy Mansfield-Jones (St Edmund’s School) gave the last presentation of the evening: “Why are we so bad at dealing with waste?”

The Lord Mayor of Canterbury, members of the Rotary Club of Canterbury and representatives from the English Speaking Union, along with competitors and supporters, provided an attentive audience.

Thought-provoking points raised during the evening included: “Although terrorism is truly awful, it does unite people [against it]”; “A one degree [temperature change] might seem like nothing on human skin, but globally it is a catastrophe”; “Partying is wonderful for stress relief”; “An important success [of Dunkirk] is that it lifted the morale of people at home and helped them prepare for years of hardship” (so giving rise to the expression “Dunkirk spirit”); and “In the 60s people washed dirty nappies; now, it takes 450 years for dirty nappies to degrade”. There were also references to quotes by others – e.g. Gandhi’s "The world has enough for everyone's need, but not enough for everyone's greed."

The judges were Brian Dobinson (Rotary Club of Canterbury), Julia Freeland, and Marta Almeida (Community Outreach Department of the University of Kent).

The winning team was The Folkestone School for Girls Team 1, who received the Brett Cup; runners-up were St Edmund’s School who received the Nat West Cup. Holly Foster was named Best Chair, Ryan Phillpott Best Questioner, Poppy Mansfield-Jones Best Speaker, and Halle Breed Outstanding Personality. Winners received their awards from Lord Mayor (and Rotarian) Rosemary Doyle. In her speech she commented: “It’s a delight to attend the competition and it’s wonderful to see how hard staff and students have worked to prepare for the event. This experience will stand the participants in good stead for the future”.

The evening was brought to a close with brief speeches from Sharon Jordan (President of the Rotary Club of Canterbury) and Stephen Prickett from the English Speaking Union.

Further pictures from the evening can be seen on our Facebook album.