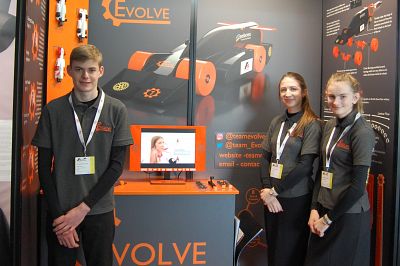 It's a real delight to tell you that the team of youngsters from Queen Elizabeth's Grammar School (QEGS) in Faversham that we helped sponsor picked up awards while taking part in the National Final of the 'F1 for Schools' competition at Silverstone.

Last December we reported about our involvement with the team and our sponsorship for their entry into the  competition, which is a global competition that aims to get youngsters involved in engineering.

As part of the competition, students design and manufacture a miniature Formula 1 (F1)-styled car using computer-aided design and manufacturing (CAD/CAM) and engineering skills. Team members are also responsible for publicity and raising funds, with each team member having a separate role - manager, chief engineer, financial organiser etc. Around two thirds of the marks are awarded for organisation, design dossier, workmanship etc, the remaining third for outright speed.

The QEGS team, 'Evolve' (so-called as they wish to leave a legacy of engineering at their school to inspire the next generation of students), did well enough to attend the National Finals in March at Silverstone. There they won two awards: the Social Media Award and the Judges' Award. They were also nominated for a third award. Sadly, as competition was tough they didn't make it to the World Finals this time - but they are clear how they need to improve and are determined to re-enter the competition. This year's UK Champions, Unity, from Emmanuel College, Gateshead, will represent the UK at the 2018 World Finals 2018 in Singapore in September.

It's great to share in Evolve's success so far and we wish them every success in the future.