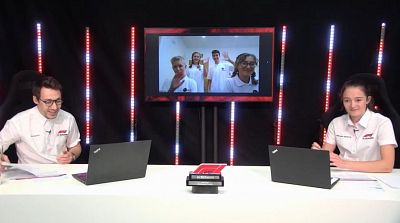 Our heartiest congratulations to Team Eclipse from Queen Elizabeth's Grammar School, Faversham for doing so well in the F1 in Schools UK 2020 National Finals on Saturday. The team came 3rd overall and were awarded "Best Display".

We were delighted that the new team has been able to do so well with support from us, a number of other major sponsors and their school teachers. (The winning team in the National Finals was Red Britannia from Robert May’s School in Odiham, Hampshire.)

Talking about Team Eclipse's result, Rotarian Brian Dobinson, who liaises with the school on behalf of our Vocational Commitee under the Chairmanship of Rotarian Mary McGeary, said "This is excellent news, especially for such a new team".

The team has six members: Javier Gladstone Contioso, Maisie Billings, Evie Curd, Jonty Furtado, Benedict Elfo and Isaac Wright. We gather that the team will remain together for next season's competition and, as they say, be "more ambitious than ever!"

In response to congratulations from us, Javier, thanked our Club for its support, adding "We are very happy to hear that we have made you proud...Best Pit Display and 3rd overall were beyond our expectations and without your support it would not have been possible."

Our Club is looking forward to hearing from members of the team at one of our future Zoom meetings, when they will present their journey so far, the design changes to their car and their future intentions.

Regular readers will recall that last year's team, "Evolve" became World Champions when they beat 55 teams from around the world at the World Finals in Abu Dhabi; members of that team (George Stonor, Lewis Fowler and Freddie Bull) have now left the school to continue for higher studies - some with bursaries/offers arising directly from their participation in the F1 in Schools Competition.

You can see the car that was used in this year's National Finals on Team Eclipse's Youtube channel here,

You can watch Team Eclipse's model car in action at the National Finals via their twitter feed (@eclipseqe) here.

Picture: A picture of the team online during the nationals. Picture credit: Team Eclipse/QEGS