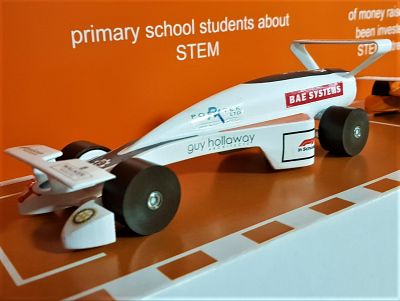 It's not often that you get to meet real World Champions, but several members of our club got such a chance when they were invited to attend a reception at Queen Elizabeth's Grammar School (QEGS) in Faversham for their World Champion F1 in Schools team!

The QEGS team - George Stonor (Team Principal), Freddie Bull (Design Engineer) and Lewis Fowler (Engineer) had developed a F1 model car that beat 54 other teams from around the world in the World Finals held this year in Abu Dhabi. Back in November the team had celebrated their success on the actual Grand Prix podium at an awards ceremony held at the Yas Marina Circuit, near the iconic Shams Tower ... and just a couple of days before the real F1 cars raced at the same venue.

The F1 in Schools competition is a design and engineering challenge which sees teams manufacture and race a model of a Formula 1 racing car; as well as designing, testing and developing the car, part of the challenge for teams is also to raise sponsorship and create their own pit display and publicity.

Along with the World Champions title the QEGS youngsters won the Knockout Racing competition and awards for Pit Display and Enterprise Portfolio. They also won scholarships to City, University of London, UCL Mechanical Engineering and University of Huddersfield, with two team members that had applied to the Unilever Williams Engineering Academy (UWEA) winning coveted places.

The school had invited our members, as well as other prestigious sponsors such as BAE Systems, to a reception for the three lads. It was a wonderful chance to meet the team again, to mingle with the other sponsors, and to meet next year's budding hopefuls - team 'Eclipse'!

Head of the Technology and Art Faculty, Phil Harvey, welcomed us to the celebration of the team's success. He told us how he first heard about F1 in Schools back when he was at university. On coming to QEGS he helped teams enter - and the school was delighted to win trophies "here and there". (An impressive array of trophies could be seen in the hall.)

The founding members (who also were at the reception) encouraged Mr Harvey to keep going - it seems they had a "four-year plan"! The youngsters decided on a re-brand - and a new philosophy of "giving back"; this soon became a big part of their work.

Team Evolve then took over the presentation from Mr Harvey, saying how sponsors had helped them in so many ways - financial, manufacturing, giving discounts or even providing raffles prizes for fundraisers. BAE Systems, for example, helped with the development of wheels for their model F1 cars and advised on aerodynamics and materials. Local sponsors Speedscreen helped with printing for the pit display, while WH Skinner helped develop a flat pack display stand (we saw a time-lapse of the display being set up). Other long-term sponsors included Walker Residential, Guy Holloway Architects and Space Syntax.

Our Rotary Clubs got a mention, and a thanks too for helping with the team's presentation skills and giving the boys a chance to be interviewed by Rotary Radio UK - when they were able to tell people from more than 100 countries around the world about their projects.

Running through the story of their evolution, the boys told us how it all started in 2016 with a team called IQ Engineering, but the 2018 rebranding made evolving part of their ethos - they wanted to encourage others to follow in their footsteps.

Their World Finals adventure kicked off on 21 November when they left for Abu Dhabi - exciting for anyone, but particularly so for Lewis as it was his first ever flight. They were delighted to be invited to the cockpit of the plane.

The first day at the competition was for submissions - but the boys also got a chance to explore the desert, see some camels and take part in "sandboarding". In the afternoon they set up their pit display.

Day 3 was the official start of the competition, when the team had to give a verbal presentation to the judges. They also found out - eventually - that their car had passed all the necessary rules and regulations. The day ended with the first racing session and an interview with the coordinator. Their aim for the preliminary race was to come in the top 10, so they were pleased to come 9th.

On Day 4 the boys had an interview with University College London (UCL) for a bursary for their M Eng in mechanical engineering. They also had interviews with Unilever Williams Engineering Academy.

Day 5 was the start of the "knockout" races, where the team was up against the number 1 seeds from Cyprus and an excellent German team. Fortunately, fast reaction times helped them to become the Knockout Champions! The boys showed us a video of the live screening to the school, and it was lovely to see their fellow pupils cheer the winners with great enthusiasm.

Day 6 of the competition was Awards day - they saw the ceremony being set up and met the German-Finnish F1 driver Nico Rosburg as well as the CEO of F1, Chase Carey. They were excited to have the real F1 team come and speak to them and ask about their car and display. There was, we gather, an exchange of business cards!

The team received the Knockout Award, and George and Lewis also learned that they had been selected for the Unilever Award.

At this point the team were overjoyed - but the evening was just starting, as next they learned that they had won the Enterprise Portfolio Award and, they were suprised to learn, the Pit Display Award.

The climax of the evening, of course, was when the youngsters found out they were F1 in Schools World Champions! The Team showed us a video of the moment they learned who had won the Final; it was a lovely moment to witness.

On Day 7 the winning youngsters got a touch of fame: They had an interview with Good Morning Arabs (a popular show in the Arab world with an audience twice the size of Good Morning Britain). With special passes they got the chance to do a pit walk and saw F1 teams setting up for the actual F1 race.

On Day 8 the boys had an "inspirational" trip to the Abu Dhabi Louvre - especially exciting for Freddie, who hopes to be an architect. The boys also visited the Sheikh Zayed Grand Mosque, which helped them learn about Abu Dhabi and its culture.

They were presented with their winner's trophy on the real F1 podium, which they said was an "amazing experience". Again, they did media interviews.

On Day 9 they were invited to the Mercedes Hospitality Suite where they got to speak to the boss of Mercedes; they also watched the qualifiers for the F1 Grand Prix.

On day 10 they got the chance to meet F1 drivers including Lewis Hamilton. They had passes that allowed them to watch the drivers set up for the race and they were interviewed by former racing driver and current Sky Sports presenter Martin Brundle.

The boys then showed us a compilation video created by Technology Teacher Bethany Butterworth which was accompanied, appropriately enough, by music from Queen's "We are the Champions"! The video of the boys waving down from the balcony to the entire school was a pleasure to watch, and showed clearly how the team had become an inspiration to all of the school's pupils.

We learnt of the boys' community work and their desire to "give back" to the wider community. They told us how they promote STEM (Science, Technology, Engineering and Mathematics) at various STEM events - even during their summer holidays. For example, in order to encourage girls into STEM they took part in the "Dare to be Different" talent event.

The boys had wanted to buy a model car race track, but felt it unfair for the track to only be used by a few people. So they helped devise a way in which every member of the school can get the benefits of it. We also heard of the work the team are doing with primary schools. For example, they bought a primary track and have worked with Year 5 students at Boughton Primary School. Now, it seems, other schools are keen to be involved. "Hopefully," they told us, "every school in the region will benefit".

The youngsters have inspired lots of QEGS students to get involved in F1 in Schools - so many that the school now has an application process (the boys being on the selection team). The next team, Eclipse, has six members (two of whom are girls): Javier Gladstone Contioso, Maisie Billings, Evie Curd, Jonty Furtado, Benedict Elfo and Isaac Wright. Team Evolve have also started to mentor Y7 and Y8 students in a junior team.

Summing up to us sponsors, Phil Harvey said "You're not just helping these guys here, you're helping the local community".

Next, the Mayor of Faversham Cllr Alison Reynolds got up onto the stage to present the team with special certificates from the Town of Faversham. She said: "Becoming the Mayor was a huge surprise - but becoming the Mayor in the year that these boys became World Champions was an even bigger surprise!". She also praised the school, Head Master David Anderson, and teacher Phil Harvey. "We know how crucial the teaching is, and Mr Harvey was the seed planted here that allowed the boys to flourish!". She ended by wishing the boys a great future.

Finally, the boys, beaming, awarded Mr Harvey with a World Champions medal. "I don't get emotional often," he said, "but this is a great bunch of lads, and credit also to the first team that started the school on its F1 in Schools journey." And on that final note the audience gave the boys and their teachers a standing ovation.

More pictures can be found on our Facebook page.