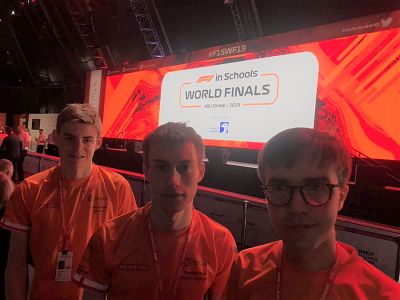 We've been following the team's twitter feed to find out what they've been up to in the build up to the race and now that they are in Abu Dhabi. (https://twitter.com/evolve_GB)

Regular readers will remember that our Club and the Rotary Club of Faversham helped support the team of teenagers with funds towards their efforts. Earlier in the year, team member George Stonor came to talk to us, and in June he was joined by teamates Lewis Fowler and Freddie Bull to talk to Rotary Radio UK, about their model car, its design and modification. The youngsters also told us how they were supporting efforts to get younger children involved in STEM (Science, Technology, Engineering and Maths).

The QEGS team - 'Evolve' - are one of five teams that have travelled from the UK to the finals. They're representing UK, along with Aflex Hose Centurion Racing (from Rishworth School in Halifax). Avidity Racing (from Scarborough UTC) are representing England while two other teams (Infinity Racing from St. Johns College, Cardiff and Quantum from Denbigh High School) are representing Wales. The challenge for the teams is to make a model F1 racing car that will speed down a track in record time. The youngsters also have to design/create their own brand, pit display and raise their own sponsorship.

The event is taking place alongside the actual Formula 1 Etihad Airways Abu Dhabi Grand Prix and will end on the 27 November, when we will find out who has won.

Altogether over 55 teams are taking part in the event, representing 22 countries around the world. It's the 15th year for the prestigious competition. The Awards Celebration Ceremony will take place at the Yas Marina Circuit track.

Picture: The team on Day 1 of the event in Abu Dhabi. Picture credit: Team Evolve/QEGS.