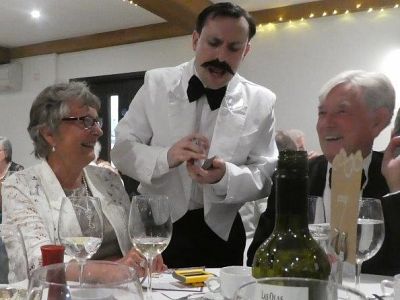 The guest event was a black tie dinner with a truly interactive performance from Moneypenny Productions. Those of you who remember the 1970s TV show will remember the guest house in question, managed by its awkward, outspoken and often rude owner Basil Fawlty and his bossy wife Sybil and run with ‘assistance’ from the accident prone waiter, Manuel.

Our members and guests had been warned to expect an unusual service – and this they certainly had as the actors playing Basil, Sybil and Manuel went around the room, each recreating the expressions and manners of the original show's characters. There was lots of laughter and giggles and plenty of farcical moments too!

There was also a raffle which had a lot of lovely prizes and raised £340 for Sharon’s charities, SCAT Bone Cancer Trust and the Kent, Surrey & Sussex Air Ambulance. An additional ‘envelope raffle’ with two prizes raised a further £71.85 for the charities.

Sharon wishes to thank Past President Geoff Goodban for collecting the raffle prizes (and for providing quite a few himself) and Past President Peter Hermitage who ran the raffle for Sharon on the night. As well as thanking the performers, Sharon also wishes to thank all those who attended, who provided prizes, and those who helped to organise the successful evening, held at Boughton Golf Club.

Reflecting on the event, President Sharon said: ‘Everyone who attended had a fabulous evening; it will provide me with many wonderful memories to look back on!’

Picture: Some of the guests with waiter 'Manuel'. Picture credit Bob Anderson.