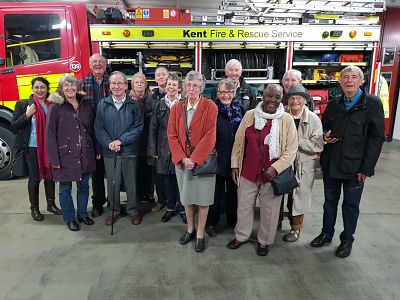 Hearing about the recent training exercise involving the Kent Fire & Rescue Service reminded us that we never told you about the very interesting visit some of us enjoyed late last year to Canterbury Fire Station.

Those of you that regularly read our news will recall that earlier in the summer a group of us had gone to visit the Fire Station in Canterbury on one of the hottest days of the year – only to hear that the crew had been sent out on a call. So, it was with great delight that we managed to reschedule our visit last November, with a total of around 15 Rotarians and their partners attending.

We were shown around the station and introduced to the equipment by firemen Niel Runciman, Jon Adams, Andy Ramsden, Craig, Josh and Malcolm.

First off, we got the chance to see one of the firefighting vehicles equipped with an impressive turntable ladder – basically a large, telescopic ladder which opens to 30 metres (approx 100 foot). This means that the ladder is able to reach the 10th floor (or so) of a tall building; sometimes this can be used as an alternative to stairs when stairwells are blocked by fire. It was quite a spectacle to watch the ladder open out.

The ladder has a cage at the end from which firemen can put out flames (using water from a firefighting hosepipe), or rescue people. The water comes from accompanying fire engines as these vehicles to do not have their own pump. The ladders have some limitations – for instance, they can only really be used in winds speeds up to 12-14 metres/second. Each machine costs in the region of half a million pounds and is used around twice a month. The vehicle is operated by specially trained staff that are required to attend refresher training every year.

We were also lucky to be at the station during a visit by Faversham Animal Rescue Unit (ARU), with their specialised vehicle. The animal rescue team covers the whole of Kent and focuses on rescuing large animals such as cows and horses.

The rescue vehicle, which has been in operation since 2003, is packed with a number of boxes containing equipment needed for such rescues. For example, there is equipment for carrying out rescues in rivers, body armour for protection in cases where an animal could otherwise inflict a lethal kick, and harnesses and slings. Staff require a variety of skills, including the ability to drive in off-road conditions, animal handling skills, crane operating skills, etc; interestingly, staff often have their own experience with animals, such as having pet horses or working with farm animals. The team often has to work with vets as stressed or aggressive animals may need sedation. The vehicle also has a water tank with high pressure so that the team can help with woodland fires, plane and train crashes.

We asked about recent rescues and were told of a horse rescue just the previous week. The team had to use an ‘air mud lance’ to release the suction of the mud in which the horse was trapped – this basically ‘injects’ compressed air around the trapped animal which overcomes the suction. For complex mud rescue operations there are separate mud rescue teams. We were surprised to hear that the fire service often has to rescue horses from swimming pools. Other unusual rescues in which the team was involved included lifting an elephant at a local zoo, saving a donkey that had fallen down a well shaft, and rescuing deer - antlers and all!

Some of our pet-loving Rotarians were also keen to learn how often cats are rescued from up trees – but, apparently, it’s not so common for the fire service to be involved in such cases. Most cats actually descend of their own accord when hungry enough (someone quipped that “they’d never seen a dead cat up a tree”). If the animal still doesn’t descend, the RSPCA will handle most cases. It’s only when things prove too challenging for them will the RSPCA call for the fire service‘s assistance.

Our group also saw an incident support vehicle. This is used, for example, in incidents with risk of contamination. This vehicle has an inflatable shower unit and carries dust masks and other specialist salvage equipment.

Rotarians were keen to find out what happens when we dial 999. We were told that we would first go through to the call centre in Maidstone (shared with the police); if the fire service was needed an alarm will sound in the station and details will be printed through. These include details of the incident number, the nature of the job and the resources required. Different rescue vehicles contain different equipment – for instance, some have large cutting equipment. The call centre decides on the appliances needed using a computer system called ‘storm’ – for instance, two vehicles may go to a house fire, while a fire at the Cathedral, categorised as a special risk, might involve four vehicles and a water unit. (‘At risk’ sites usually are visited routinely, but owners of sites such a nursing home should work with the fire service to ensure the service is aware of their needs.) In recent times the height vehicle has had to be used to help obese people – such situations are on the rise.

The time from receiving a call to mobilisation is only around two minutes. A vehicle will have an officer in charge, a driver, and two firemen in the back in back, ready with breathing apparatus. Route cards are available for the driver, although these days satnav systems and phones are used for navigation. If more than three ‘appliances’ are involved at a scene, one officer will take charge. In cases of suspicious fire, a fire investigation team is also called out – this team will work with police to fully investigate the incident. This usually only takes place if there’s a casualty or a specific reason for investigation.

The station estimates it attends 1000 incidents a year, with more lives saved in RTAs (road traffic accidents) than house fires these days due to increased use of smoke alarms making homes safer.

All crew members are trained in first aid. Apparently, there’s no difference in what a trained female and male firefighter can do during a rescue. Some of the station’s staff are full-time, others part-time. People can apply to join the service at 18 and they retire at 65.

Sadly, cuts have had a huge impact in recent years. Where once the fire station had four ‘watches’ they now have a self-rostering system with 44 staff instead of 50. 80% of their funds are spent on wages and they haven’t had a recruitment drive for 10 years.

We were interested to learn that Faversham, Herne Bay, Whitstable and Deal stations just have a day crew, so are only manned until 7pm, after which a paging system is operated. Aylesham and Wingham only have a part-time service that also relies on the pager system.

During our visit, as well as seeing the vehicles, we were shown around the station. We saw the ‘pole’ and the area where the firefighters get changed. One of the firemen demonstrated descent using the pole, while another assisted volunteer, Rtn Roger Power, to get dressed in firefighting equipment. Not an easy task!

Finally, we also got an opportunity to hear about fire prevention activities in the community. Homes with young children and elderly occupants are particularly vulnerable. Kent Fire & Rescue Service offers free safety advice and services to everyone and hopes that all homes have working smoke alarms. For those who are hard of hearing there are alternatives to loud smoke alarms – e.g. alarms that vibrate or have lights. The service also recommends the use of carbon monoxide detectors in or near every room with a heating or cooking appliance.

We certainly had a very interesting visit and would like to thank all those who helped arrange it, including members of our Vocational Service Committee. Our particular thanks go to the firefighters who gave up their time to show us around and answer our numerous questions.

For further pictures of our visit, please visit our facebook album.

For advice from Kent Fire & Rescue Service about safety in the home and smoke alarms, click here.

There is also plenty of other advice from Kent Fire & Rescue Service under the ‘your safety’ tab, here.