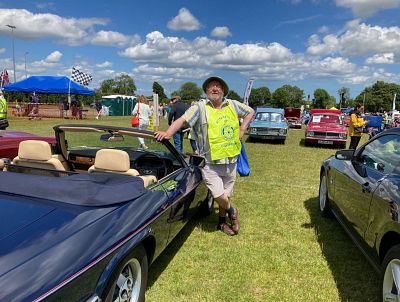 One of our Members, Jim Gascoyne, was delighted to lend Canterbury Forest of Blean Rotary Club a helping hand at their Classic Motor Show on the grounds of Canterbury Rugby Club earlier today.

Jim volunteered with the car parking at the show, and there he met fellow Rotarian Maxine Blades and her husband Kevin who were attending the show.

All three reminisced about the cars that they had previously owned, and those owned by their late fathers and uncles in the 1950s and 1960s. Many examples, such as Ford Anglias, Minis, Rovers, Volkswagen Beetles and MGBTs, were on display in the show.

The "Canterbury Classic Motor Show" was put on by Canterbury Forest of Blean Rotary Club to raise funds for Pilgrims Hospice and other local charities. The one-day event was billed as having classic cars from 1920 to the modern day, including American Classics, Porsche, Lotus, Fords, Triumphs, MGs and Vauxhaulls. There was also a "classic music show" showcasing Gold Trax, Lee Patrick, Hot Wax and Martin Farbrother - plus a number of stalls and children's entertainment.

"Congratulations to Forest of Blean for a great show!" said Maxine about her visit.