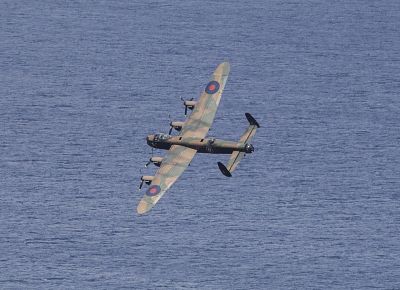 Past President Neil Fraser entertained our Members on Tuesday with an interesting talk on RAF Bomber Command, using his extensive reading on the subject.

The talk, illustrated with numerous historical pictures, started at the point in history between the World Wars when the UK's strategy was that bombing would succeed in defeating the enemy without the large number of army casualties seen in World War I.

However, as the bombing campaign progressed during World War II and despite improvements in navigational aids, there were insurmountable problems in finding the target at night - affecting the effectiveness of a bombing campaign and making flights risky for pilots and crew.

Neil described how there were over 57,000 RAF deaths out of the 125,000 aircrew involved, including many from Canada, Australia and New Zealand. Most of the aircrew had volunteered and were younger than 25.

Neil described that whilst bombing shortened the war against Nazi Germany, it did not succeed in defeating the enemy in isolation.

The talk created an extensive discussion on the effects of war and included some personal reminiscences from some of Members of the Club.

Picture: A picture of a Lancaster Bomber taken during an air show. Image by neico from Pixabay

With thanks to Neil for help with this article.