Visit to The Rotary Club of Freshwater Bay 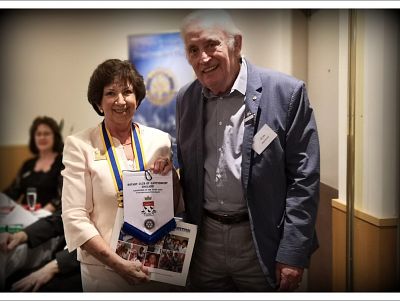 On a recent visit to Australia, Canterbury Rotarians Alan and Dee Mepstead were privileged to be invited to the Rotary Club of Freshwater Bay’s Annual Christmas dinner and tenth birthday celebration.

Chartered on 19th December 2008 with the aim of doing things a little differently, the Rotary Club of Freshwater Bay in District 9455 was the first “cocktail club” in Western Australia.

Their meetings are held after work in Perth’s western suburbs, and last no more than one hour. Rather than having a meal with meetings, they offer light refreshments prior to the meeting, keeping the cost of attendance down to as little as $5 per meeting.

They have maintained a fairly even 50/50 split of male/female members since the beginning, with their first two Presidents being female.

Members range in age from the early 20s to early 80s, and they encourage both partners in a couple to join if eligible.

They take pride in being a very active club – the number of different local and overseas projects they have on the go and that they have completed speaks for itself. They have been awarded a Significant Achievement Award for their Microscopes in Schools Project, two members have Service Above Self Awards, most years since chartering they have had been awarded the Best Metropolitan Club Bulletin in the district award, and they have also received awards for Membership, Best Article in Rotary Down Under magazine, and Best Indigenous Project in the District.

The Rotary Club of Freshwater Bay has a wide variety of projects on the go locally and overseas. Here is a selection of those projects:

Alan presented the club with a Canterbury club pennant and in turn was pleased to accept on behalf of our club, a book on the work of Rotary in Australia.

Di and Keith Collins who are both Past Presidents of Freshwater Bay are currently visiting Canterbury and staying with Alan and Dee for a couple of days when they hope to meet as many of Members of the Rotary Cub of Canterbury as possible.