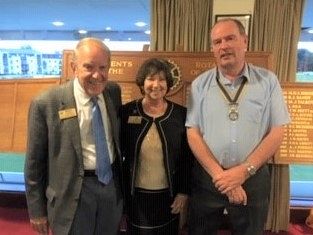 Two things are important to us Rotarians; being part of a global community & service to others. So we were delighted to welcome visiting Rotarians from Australia to our recent meeting and also learn more about Rotary's Polio Eradication Programme.

Earlier this year, two of our members (Rtns Alan and Dee Mepstead) visited the Rotary Club of Freshwater Bay while travelling out in Australia. There, they were greeted with great hospitality - so it was a pleasure for our Club to do the same when Rtns Dr Kenneth Collins and Diane Collins from Freshwater Bay visited us last week. Ken also spoke to our members about his longstanding involvement with Rotary's Polio Eradication Programme.

Ken and Di are both members and Past Presidents of the Freshwater Bay club in Perth Australia. Di was given a Women in Leadership Award at the recent International Congress in Hamburg. Ken, a Rotarian for over 50 years, holds the Australian equivalent of the OBE, as well as the Pioneer Polio Award and the Service Above Self Award, which are amongst the highest possible recognitions in Rotary world wide.

Ken spoke to us about the Rotary Polio Eradication Programme with which he has been actively involved since its start in 1972. Mass immunisation had bought about a large drop in the number of reported cases, but as the Programme wound down the numbers rose again to over half a million in 1985. He compared this to an Australian Bush fire – it is not out until it is totally out.

In 2018, due to the re-introduction of the mass immunisation programme, there were only a total of 33 cases reported in two countries – Pakistan and Afghanistan. Unfortunately there are already 42 cases this year. Religious and cultural differences, which have also impacted on the safety of health workers, prevented the total immunisation of children.

Essentially, mass immunisation must continue until Polio is totally eradicated. Rotary International has pledged 50 million US dollars over the next three years to help achieve this target. The Bill & Melinda Gates Foundation will add two dollars to every one donated by Rotary to give a total of 150 million dollars.

As a past trustee of the Rotary Foundation Ken also answered a number of questions on Global grants and the best way to achieve them.

We all wish both Ken and Di a safe trip back to "OZ".

For further details about the Rotary Club of Freshwater Bay, click here.

For information about Rotary's efforts to end Polio, click here.