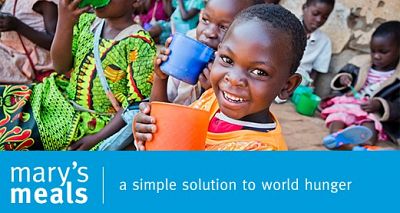 Imagine being so poor that you have to choose between education and food for your child. This is something that international charity Mary's Meals helps to address in some of the poorest countries of the world. We learned more from speaker Gabriel Herbert

Our Club has supported Mary's meals in the past through our International Committee, but it was good to hear more about how the charity helps some of the world's most deprived children.

Gabriel is an executive assistant that regularly volunteers for Mary's Meals by giving talks about the charity - she joined us from London by Zoom, her first Zoom experience in such a role.

Gabriel started off by outlining what Mary's Meals does - "feed children from some of the world's poorest communities at school - giving them hope for a better future". The charity was set up by Scottish salmon farmer (at the time), Magnus MacFarlane-Barrow. Showing how life-changing ideas can come to any of us at any time, we learned that Magnus had first been inspired to do something to help the poor while sitting in a pub in 1992 with his brother and watching news about the war in Bosnia–Herzegovina. He was determined to do something to help. After raising funds from family, friends and acquaintances he'd gone off to help people who were struggling - only to come back and find donations were still pouring in in his absence.

Magus decided to take a year's sabbatical from farming and set up a voluntary organisation - this, eventually, transformed into Mary's Meals, and Magnus abandoned his salmon career.

The name Mary's Meals refers to the Mary, mother of Jesus; because of the beliefs of its founder it has strong Catholic roots. However, activities support children of all religions and none and the charity is non-denominational. Its vision is that "every child receives one daily meal in their place of education and that all those who have more than they need, share with those who lack even the most basic things". Its mission is "to enable people to offer their money, goods, skills, time, or prayer, and through this involvement, provide the most effective help to those suffering the effects of extreme poverty in the world’s poorest communities".

Initially, the Mary's Meals team worked from Magnus' parent's shed (which Gabriel showed us a picture of). This, it seems, is still the organisation's HQ - although the charity has now grown in size and carries out its work in 19 countries around the world including Thailand, Syria, Benin and Ecuador - the first country being Malawi and the most recent being Niger. We learned that it is a grass roots organisation with a strong ethos of working with others and working closely with communities and their leaders. The charity works with local players to ensure school children have nutritious meals.

Gabriel showed us a picture of a young family - a woman surround by several children. We learned that the woman, Emma, was dying of HIV/AIDS, a disease that had already killed her partner. Yet their oldest child, Edward, had no formal education and had never gone to school; he was only 14. Speaking of his hopes for the future, Edward had said "I want to have enough food to eat and go to school one day". (A statement that probably made some of our members reflect on how their own children or grandchildren, perhaps, had been just as determined NOT to go to school at that age.)

Gabriel emphasised how Mary's Meals works with "everyone" in the community, with communities owning their own feeding projects. Mary's Meals are often now invited by groups to set up a local scheme. The work is volunteer operated - often by relatives of the school children; to illustrate this she showed a picture of mothers and aunts cheerfully cooking communal meals for children.

All ingredients for the foods are locally-sourced where possible, so helping the local economy while meeting local cultural and dietary requirements. This also decreases "food miles". Their hope is to carry on feeding children for as long as needed, and they are happy to have supported many thousands of children with meals through the child's school years. Gabriel showed a picture of a young woman in graduation gown - Veronica - who had once been a recipient of meals.

We learned that 93% of donations to Mary's Meals actually goes towards their charitable work (compared to Oxfam, Gabriel told us, where the figure is closer to 84%). The cost for an individual child is remarkably low - just 8p for one meal. She told us that for under £16 (pre-Covid), donors could feed a child for one whole year.

As mentioned, Niger, in Africa, has recently been added to the list of countries in which Mary's Meals works. There, they work with a French charity that educates children in prison. (We learned during the Q&A at the end of the talk that many of these children were street children who perhaps had committed a petty crime such as stealing an apple - something that used to happen in this country back in medieval times.)

The same local ownership model is used in different countries - e.g. in Myanmar, Lebanon and Kenya. It seems that children often miss education as they either need to work or spend the time scavenging for food. Sadly, around 8,000 children die each DAY from hunger-related conditions. Mary's Meals research has shown that Mary's Meals results in increased school attendance and academic achievement.

We were shown a number of pictures from India, Malawi, Haiti and Ethiopia.

As for many charities around the world, the Covid-19 pandemic has affected how the charity works. They have had to change or adapt many of their activities, so the normal costs may be different this year. They are also now giving out bars of soap and hygiene advice to parents and children.

Gabriel showed us a picture of a Zambian mum, Naomi, with 6 school-aged children who would normally be fed while at school. Lockdown measures have affected that - but Mary's Meals is working to ensure the children have a meal even if they don't attend school in person. Gabriel told us how one child said "closing the school affected us a lot as we no longer had Mary's Meals porridge" but with the adapted measures now the in place the child said he will be "energetic once more".

Gabriel went on to talk about what people can do to help. She spoke about all sorts of fundraising ideas being carried out by volunteers - including one idea to have a "world porridge day" to raise funds. In Scotland one company is sponsoring a "Quadrathlon". Other volunteers are holding socially-distanced events and activities. She described how her own local parish held socially distanced jumble sales in its big church hall that raised over £1,000. She suggested other events which could held according to guidelines - such as a film viewing or coffee and cake mornings. She encouraged everyone to volunteer or encourage others to volunteer if they could.

Gabriel also encouraged us all to watch a new film that they had produced featuring Scottish Actor and Producer Gerard Butler: "Love Reaches Everywhere"* It seems that Gerard, who has supported the charity since 2010, is personally sponsoring a school in Haiti.

We learned that the charity has a great group of volunteers around the country and is therefore able to provide suitable speakers for all sorts of groups - from school children to clubs and organisations such as ours. There is also a mailing list through which people can get latest news and share their ideas.

Gabriel ended with the words "no child should go hungry" and thanked us for our interest.

*This film can be watched here: https://www.youtube.com/embed/hSrw2fL1fOU