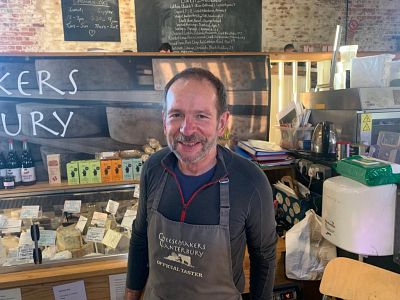 Most of us enjoy a bit of cheese from time to time - but few of us know the history of cheesemaking and details of local English fine cheeses. It was a delight to learn about this from George Ward from the Cheesemakers of Canterbury.

George, who lives in nearby Kingston, used to work as a features writer for the Kent Messenger group, often writing on food and travel. A slump in advertising revenues and the resultant disappearance of space for features led George to take redundancy about 12 years ago. He'd previously written about Jane Bowyer's Cheesemakers of Canterbury when Waitrose began stocking it; when Jane later heard he was "on the market" she asked him if he would take over the cheese counter at The Goods Shed (the local farmer's market/food hall near Canterbury West Station) and he agreed to do so. "I'm still there, still loving it," he told us, with a broad smile.

George started his talk by asking how many of were unable to drink milk as children. This led him to talk about an enzyme called lactase which helps us digest lactose (milk sugar); in most mammals this enzyme is switched off as youngsters are weaned so that they have to look elsewhere for their food - leaving their mothers free to get on with their own lives. But it seems that around 7,000 years ago a genetic mutation in a minority of humans, about 35% of us, meant that the enzyme switch-off failed to happen. The result was that some of us humans have never really been weaned from milk. "Europe, the Middle East, and North Africa is where the genetic failure occurred," he said, adding that in these areas milk has become central to the culture.

George went on to talk about milk's place in culture and literature. For instance, he mentioned how creation myths told of how our galaxy (the Milky Way) formed when the Greek goddess Hera spilt her milk while feeding Hercules. The very word galaxy, we learned, comes from gala, the Greek word for milk.

George also spoke about the Egyptian goddess of motherhood, Isis, who was often shown with a cow’s head breastfeeding a pharaoh, and the Roman tales of Romulus and Remus who are often depicted being suckled by a she-wolf. It'd=s not unusual to see baby Jesus being breastfed by the Virgin Mary, while Hindus have a creation myth in which the god Vishnu churns a sea of milk to create the universe. The Fulan people of West Africa’s creation myth has the world being created from a drop of milk. "And we, of course, believe the moon was made of cheese!" George added jokingly!

We learned that we have kept cattle for around 10,000 years and that UK dental research dates cheese consumption back about 6,500 years. You'd think this long history would mean cheesemaking has developed a great deal over the years - but George told us this wasn't the case until 40 or so years ago.

Until then, cheesemaking was merely seen as a practical way of dealing with excess milk produced in the spring/early summer, when grass is at its richest and milk yields shoot up. A small farmer may have been left with milk he could not sell, and certainly could not conserve (as there was no refrigeration back then). His options were to throw the excess milk away or find a way of turning it into something that keeps.

Very early on people noticed that souring milk would separate the solids (the curds) from the liquid (the whey); over time people realised the drier the curds, the longer they kept. "But the science behind this transformation was beyond them," said George. He recounted how, even in Victorian times, cheesemaking was a primitive business. For example, in the West Country, Dorset Blue Vinny was made by people who had only the vaguest ideas of how it turned blue. They recognised mould, so therefore would drag mouldy boots and saddles through the milk (!!)

"It was not a great time for cheese," said George. Dickens, for instance, never mentions Cheddar in any of his works. Or Blue Vinny, or Lancashire, or Wensleydale (though Cheshire gets 7 references, Gloucester 6, Stilton 6 - and cheese mites get 2!) Stilton, a cheeseboard favourite these days, was only used as a metaphor for decay.

"Why these unappetising descriptions?" George asked. It seems that in an era without refrigeration or much appreciation of biochemistry, making and storing conditions were very basic. Here he referred to a quote in one of Elizabeth Gaskell's works that refers to an aunt being found "upstairs, inspecting the summer’s make of cheeses”. "How hot would an uninsulated attic have been in the height of summer?" George asked.

We learnt that mass production of cheese began in the 1870s to feed the exploding urban populations. With that came research in Somerset into the link between badly kept milk and bad cheese. At about the same time people started taking note of the difference in the flavour of milk from different areas and, more particularly, different pastures.

The UK, it seems, got into globalisation very early. It "quickly gave up on agriculture ... preferring to rely on imports from colonies, old and new." We imported much cheap cheese from America and New Zealand. By the start of World War I (WWI) we were so bad at agriculture we imported 70% of our cheeses, 40% of our meat, 80% of our wheat and almost all of our sugar.

By the end of WWI we were near starvation and food rationing was introduced. Given that it takes around 10 litres of milk to make 1 kilogram of cheese, we simply did not have enough home-produced milk to meet demand, so in 1941 cheese started to be rationed. The adult ration was set at a mere 2oz (50g) a week. Overnight cheese production in the UK almost ceased.

But after the war came the need to produce more of our own food, and to produce it cheaply. This led to an era of cheap, mass produced, but basically tasteless cheese. "There was a reason cheddar was referred to as mousetrap cheese," said George, adding "remember, mammals such as mice don’t actually like cheese!"

Madly oscillating milk prices and cuts in EU quotas all put pressure on dairy farmers in the post-war years. And then came the advent of cheap foreign holidays and the British palate's discovery of the cheeses of France, Italy and Spain.

This led to UK farmers seeing a way of adding value to their milk. Instead of selling it for pennies to the big dairies, they could produce something unavailable elsewhere - artisan cheeses. These could be made with unpasteurised milk to differentiate them even more from the bulk industrial producers. "The renaissance of cheesemaking had begun."

George then went on to talk about the cheese making that he is involved with. The first cheese made at the Dargate dairy, known as Ashmore, was produced in May 2007. In 2010 they began making soft cheeses at Hastingleigh. Now they make all sorts of cheeses, including cow's, sheep, and goat's milk cheeses, both hard and soft, pasteurised and unpasteurised. For instance, Ashmore has chilli, smoked and mustard varieties. There is a soft cheese named after Jane Bowyer's family, one called Dargate Dumpy and another called Canterbury Cobble!

George was asked lots of questions by the audience about varieties of artisan cheese and how they are produced and we are sure many of our Members will think twice about reaching out for some mass-produced supermarket cheese; thanks to George we expect quite a few artisanal cheeses will be making an appearance on Christmas cheeseboards this year!

To learn more about the Cheesemakers of Canterbury, click here.

With grateful thanks to George for his valuable help with this article.