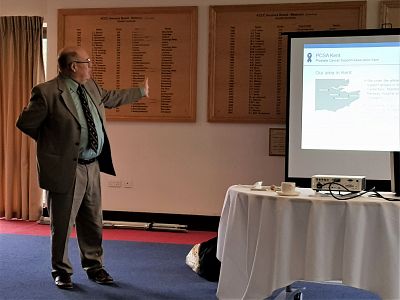 Each year 40,000 men in the UK are diagnosed with prostate cancer. Sadly, 12,000 also die each year - equivalent numbers to a fatal Jumbo jet crash every two weeks. Thankfully, screening methods are getting better and experts believe they will improve massively within the next 5 years.

On Tuesday we had the pleasure of hearing a talk from Graham Edwards, from PCSA Kent (formerly PSA Kent), a patient led charity that supports men and women whose lives have been affected by prostate cancer.

Our members have heard about prostate cancer before, so the focus of Graham's talk was on how the charity supports those diagnosed with prostate cancer and on what is has done with some of the money it has raised and received (including £500 from our Club and donations from other Rotary Clubs, Lions Clubs, and other organisations and individuals etc). Graham himself was diagnosed with prostate cancer some years ago (for which he was treated) and clearly the charity's work is very personal and meaningful for him.

Graham is an ex Royal Marine and also an expert in judo; in fact at one time he taught judo to both the Special Air Service (SAS), Special Boat Service (SBS), the armed forces and others. After that he set up a shop in Deal and then became a Parliamentary usher, looking after politicians including Margaret Thatcher and Tony Blair.

PCSA Kent was formed in June 2006, initially meeting in the Education Centre and Library at Kent & Canterbury Hospital - where in fact it still meets. With the help of Macmillan nurses the charity was able to make contact with a number of medical consultants; an important relationship that still continues.

Its main support group is based in Canterbury although it now also has support groups in Maidstone, Medway and Tunbridge Wells and it does some work in Bromley and Orpington. Those who go to its meetings get a chance to talk with others who are affected by prostate cancer. Often PCSA Kent also brings in a speaker to talk on health or related matters that interest the membership. The various groups also have social events for members and their families and the charity produces a newsletter called "Trust News".

PCSA Kent is also actively involved in raising public awareness about the disease and it has an active fundraising programme which raises funds for medical equipment and training within the hospital specialities that provide care to prostate cancer patients.

Recently, as the result of a fundraising scanner appeal, the charity purchased and presented seventeen portable scanners (each costing £7,500) to NHS hospitals throughout Kent. This scanner helps monitor the prostate, bladder and kidneys. Our £500 donation went towards £48,000 for a scanner that will assist surgeons during operations. This will allow people in Canterbury to have certain treatment where previously they would have had to go to Maidstone. The charity has also donated a number of other machines or technical systems to surgeons - including biopsy scanners, 3D TV monitor screens, and even DVD patient packs.

PCSA Kent also helps people with prostate cancer in other ways e.g. with a special card or keys allowing individuals who have them to access or open public toilets.

All sorts of people support the charity and have helped raise funds, with activities including half-marathons, sky jumping, football, swimming - even a Batman & Robin-esque "Y fronts outside trousers" event!  Their current aim is to raise funds for a hand-carried diagnostic ultrasound system (which costs £25,000-£40,000) and to raise funds for special "spacers" that will also help treatment of those with prostate cancer.