Visit to The Grand Hotel, Folkestone 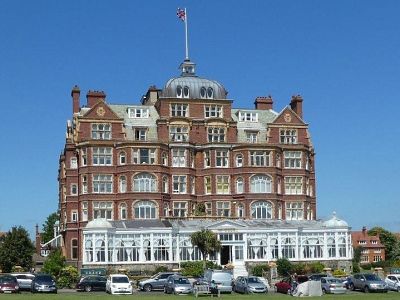 Several members of our Club and their guests enjoyed a visit to the Grand hotel in Folkestone earlier this month during which they were given a 'Grand Tour' of the historic building.

Built in 1899, The Grand claims to have 'undoubtedly the finest views of the world famous Leas Promenade'. The hotel has an impressive history and was a favourite of the then Prince of Wales with his Mistress Mrs. Keppel. It was also a centre for spies going to France during  World War I. It was also the home of detective novelist Agatha Christie when she was writing one of her books.

Twenty people went on the visit in total. They enjoyed a guided tour which included the vast dining and ballrooms of the hotel, numerous other function rooms, the former kitchen (in the basement) and two very different apartments (one of which can be seen just below the flag in the picture). It was fascinating to get a 'behind the scenes' view of the building.

The visitors had a great time and finished their trip with a cream tea in the Conservatory.