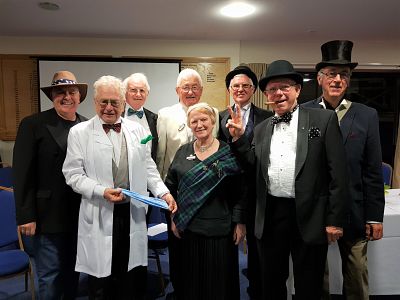 Last Tuesday, some of our members flew up-up and away on a balloon – while others came down with a mighty fall. But don’t worry, no one got hurt. Read on about the tongue-in-cheek fun and laughter at our Great Balloon Debate.

The premise of the Great Balloon Debate is that several famous people are flying in a hot air balloon over the hills and valleys of the UK and beyond. However, the balloon gets into trouble as it flies past the coast over shark-infested waters. It’s imperative that the occupants of the balloon “EXIT” one by one until the balloon is able to gain height again and continue its journey with its one surviving VIP. The only way to decide who is to remain in the gondola is for the travellers to plead their cases to assembled dining guests and allow the audience to decide who is thrown out.

At the start of the debate the travellers were introduced to the audience – to applause, cheers, boos and hisses according to ancient and curious allegiances. Earlier someone had spied that Mary Queen of Scots, before commencing the balloon flight, had recruited those with a Scottish connection to her side, distributing the orange and red “Royal Flag of Scotland” for these supporters to wave at every mention of Scotland.

First up to plead his case was Isambard Kingdom Brunel, resplendent in top hat, cravat, wing-collar shirt and waistcoat, and with thick black side burns in keeping with the times. He spoke of his engineering skills and how he built the tunnel under the Thames with his chief engineer father, Marc.  He also reminded us of his much-needed ability to build bridges (perhaps needed in these days of political turmoil). He’d just started to tell the tale of how he nearly died entertaining his children with a magic trick when the speaker, rather sonorously, curtailed him, saying he’d run out of time.

Next up was Sir Winston Churchill, sporting a hat, cigar and bow-tie and speaking in his characteristic raspy voice. He pointed out that he was in fact already dead and reminded us that when asked if he was prepared to meet his maker, he’d said he was – but questioned whether his maker was prepared to meet him! In words that might (or might not) resonate with certain present-day politicians, he reminded the diners how “Success is stumbling from failure to failure with no loss of enthusiasm” and emphasised that “one should never give in”.

Bob Dylan, casually dressed in T shirt, jeans and (slightly ?Australian-looking) hat, languidly came up next. He claimed that without doubt he was THE most significant musician and the only living Nobel prize winner in the balloon. He also tried to convince diners that “Blowing in the wind” might be important for the balloon’s onward journey.

Dylan was followed by Alexander Fleming, arriving straight from his laboratory in his white coat, carrying several Petri dishes. As appropriate for his time, he wore some rather dapper shoes that we suspect won him some admirers. Fleming told diners of his discovery of the lifesaving drug penicillin. He made the case that HE alone was in a position to discover the drug, thanks to leaving a Petri dish out while he’d gone to a holiday in Scotland. (To bizarre cheers from Mary QOS’s loyal supporters.)

But Fleming had to end his speech when the speaker interrupted and called up Little Red Riding Hood’s grandfather. This gentleman, it turns out, was a thoroughly modern man. His granddaughter had taken after him. For example, when the wolf had told the little girl that she was not safe walking in the woods, she’d questioned the “rather sexist remark”. She’d also had the common sense to take her grandma a sodium-free, low-fat meal. Grandpa was just about describe how the “log fuel technician” had run to Little Red Riding Hood’s aid when the speaker interrupted again, this time calling upon “Welsh wizard”, David Lloyd George to make his case.

Lloyd George, also wearing a cravat and hat, and speaking – perhaps – with a touch of a Welsh accent, started by saying: “I ask you to look at your political leaders today…then look back and you will find me a political giant!” Diners were told of Lloyd George’s humble beginnings, and his achievements – unlike his travelling companion Churchill, in both war and peace. He also garnered support from “one or two” of our audience members when he reminded them of his reforming work with pensions.

Next up was Mary Queen of Scots, wearing her crown and tartan sash and carrying a purple crystal sceptre. Speaker, Lord Peter Hermitage, asked the audience to arise for her – and then asked her permission before allowing diners to sit down. Mary’s aforementioned ‘Scottish” courtiers – in particular Rtn Bob Anderson, more vociferous than others – rose to their feet and waved their flags at all the Scottish references. In pleading her case, Mary reminded diners that she was the oldest of the travellers, hailing from the 16th century. She got the sympathy of the audience by telling them of her sad and turbulent life, becoming queen at 6 days old and being imprisoned in later years. Several times she also reminded diners, in her gentle Scottish accent, “I cannot swim….and I do not like sharks”.

The time came for the vote and the two tellers, Rtns Brian Dobinson and Caroline Lees, carefully counted hands. But when it turned out that some diners were voting with two hands, the tellers switched to counting people.

Brunel and Dylan were chosen to meet their end and were “thrown” from the balloon into the great unknown below.

A second round of pleas ensued. Churchill threw himself at the mercy of the public, in the hope that he might REMAIN. Mary Queen of Scots again went for the sympathy vote, telling diners of her marriages with their unfortunate endings. Somewhere, it seemed, a lady called Nichola Sturgeon was mentioned. Little Red Riding Hood’s grandpa again reminded us of his granddaughter’s courage and spirit: As the log fuel technician had run to her aid, she’d shouted “How dare you think we can’t solve problems without a man’s help!” Lloyd George continued to tell us of his achievements and his success in leading a country in war with no military experience himself. Fleming kindly shared one of his experiments with us – a jar of rather green and mouldy bread – and again reminded us of the importance of his discovery, especially as sepsis was common. Pricking your finger on a rose could otherwise lead to the deadly condition.

Lord Hermitage asked for questions from the floor. President Margaret quizzed Churchill about an alleged encounter with the ghost of a naked Abraham Lincoln. In response, Churchill stated: “I might have turned around and shown him my better side”. Rtn Raj Dasan asked Fleming about the use of Penicillin to treat STIs…to which the response was “WHO has not taken penicillin?” At this point there was some commotion in the audience and the speaker had to call for order. PP and Rtn Stephen Thompson congratulated Welshman Lloyd George on success in the Grand Slam this year and asked about coach Gatland. “I will have a quiet word with him,” Lloyd George said, continuing: “where are the inspirational leaders of today?”. PP and Rtn Phil Abbot asked Red Riding Hood’s grandpa which fairytale character he would most like to accompany him on holiday, but the response was lost in the melee. Dee Mepstead asked Mary QOS for advice on whiskies, to which the queen responded: “I can do better, I can give you our finest drink” and brought forth a bottle of Irn Bru.

Further votes were taken. Red Riding Hood’s grandpa was thrown out – just as well as he had an appointment at another Rotary club (so going from the Forest of Arden to the Forest of Blean). Fleming, sadly, also had to depart – but not without requesting his mould back (tasty!)

A third round of debate followed. This time Lloyd George aimed for the sympathy vote with a reminder of his tough childhood; he also reminded all of the resistance he met from the old guard in bringing reform. (The Scottish supporters seemed to give out a loud yawn.) Referring to her failure in relationships, Mary QOS stated that she “liked men; I’ve always liked men”. It seemed that after being a prisoner for many years she again lost her head. This time, though, “not to a man”. She just lost her head. She called on her courtiers to arise one by one – “arise Anderson, son of Anders,” she called out. “Arise Thompson, son of Tom”. John Harris (of Tweed) was also made to arise. Alastair Scott and his wife Heather seemed on her side thanks to their surname. Even John Bobba, decidedly not Scottish, was brought onside by virtue of the fact that he’d worked in Scotland. The mass “uprising-of-a-sort” seemed to have taken the speaker by surprise, as he desperately called for order and declared he’d lost track of time. Finally, Churchill reminded all that he had coined the phrase “iron curtain” and that “If we open a quarrel between past and present, we shall find that we have lost the future.”

The diners were asked to make a final vote, this time for the person that should be saved. The vote was won by Mary QOS, who was given a certificate of survival from the speaker. Addressing the audience, sceptre in hand, she said: “My people, thank you for awarding me this wonderful certificate. As you know, I cannot swim…and I am afraid of sharks…”

At this point Mary was bought down to earth with a loud bang. It seems the balloon had travelled in an unplanned trajectory and veered too close to the sun (aka lightbulb) and burst. “That’s all of us sunk,” said speaker Hermitage, wryly.

The speaker then ably brought the debate to an end. In fact, it seemed he was so successful in his role that he was called upon to be the speaker at ALL future meetings.

As the evening drew to an end a final vote of thanks was given to Peter for arranging the entertainment. “Without Peter,” said President Margaret, “I fear we would have tired of each other and eaten far too much!”

We are grateful to all our members and valued guests for joining us and showing that Rotarians have a good sense of fun and camaraderie.

Disclaimer: All characters and events depicted in this debate are entirely fictitious. Any similarity to actual events or persons, living or dead, is purely coincidental.