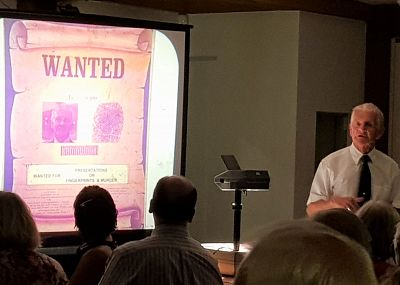 Over £250 was raised in support of President Sharon's chosen charities at an entertaining dinner with Jack Dean who served a 35 year career at New Scotland Yard as a Fingerprint Expert and Crime Scene Examiner. In this time he examined 120 scenes of murder, dealt with all levels of crime including terrorism. For 10 years he was the Senior Fingerprint Expert in the West End of London so dealt with offences at Royal Palaces, Governmenet Buildings, etc. He also had dealings with the fingerprint aspect of crimes such as Lockerbie, teh Marchioness Disaster and The Great Train Robbery.