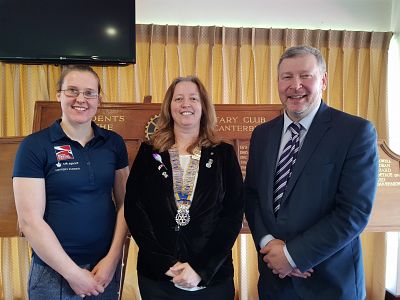 We were lucky yesterday to have a double presentation at lunchtime - first from Olympic skeleton hopeful Rachel Hanagan and then from the Chief Executive of Kent Messenger Charity Team, Simon Dolby. We also had a special guest!

Rachel, who is a hopeful for the 2022/2026 Winter Olympics, has just returned to Canterbury after finishing her first year of training. Last year our club helped Rachel with a donation to help with her expenses, and since then Rachel has been updating us on her training (which we reported on in February). So it was a delight to actually get to meet her in person, hear her backstory and get unique insight into how she became the athlete she is today.

Rachel is a local girl - she went to Parkside Community Primary School and then to Canterbury High School; she studied Sport Science at Canterbury Christ Church and her family still live in Canterbury. Even as a young child Rachel enjoyed sports. She's been involved in athletics since she was nine and was a member of the athletics club in Ashford. She'd always dreamt of being an Olympic Champion, but a number of injuries made her think this would be impossible. Nevertheless, while Rachel was working at Christ Church when she finished her degree and while she did a week long physiology course at Loughborough she thought she'd take a chance on getting measured up as part of a “Discover Your Gold” Talent ID campaign.

As a result, in October 2016 Rachel received an invitation to take part in Phase 1 assessments at Lee Valley, alongside another 3,000 or so athletes. Selectors were looking for people for the skeleton, cycling and canoeing. At the time everyone was well aware of Chris Hoy's Olympic success. Rachel felt she did well and found it nice to be tested for an Olympic event.

A few weeks later Rachel was pleased to receive congratulations on getting to Phase 2. She was to be one of 50 athletes to trial for the skeleton. This is a winter sport in which competitors travel down a hard ice track at speed while lying face-down on a sled (so named because of the 1 metre long sled’s bony appearance). Rachel was invited to Bath (UK home of the skeleton) and was trialled on a ‘push track’ – basically a concrete hill. Again Rachel was successful and was among the last 20 people.

Despite stiff competition, Rachel managed to get to Phase 3, which took place at the Commando Training Centre Royal Marines in Lympstone, as well as Bude Surf Life Centre and back in Bath. During this she had to have a psychological assessment and, in order to see how quickly she could pick up new skills, further tests for physical ability.

She then got a phone call to say she was one of 10 – and had a month to prepare. Phase 4 was a two week ice camp in Austria where she tried skeleton for the first time. There, the atheletes learnt basic steers, sled set up and what to expect when out on season. There was also video analysis by coaches to assess abilities and the athletes had to undergo other tests. (One of these gave us all the chills in quite another way – Rachel had to have ice baths, which basically meant sitting in snow for 2 minutes.)

Yet again Rachel had a long wait – but about a month-and-a-half later she was told she was one of eight athletes to make the GB Talent Squad for the skeleton. Suddenly Rachel felt her Olympic dream could still come true – just not in a sport she'd expected. She had to move to Bath and took on a flexible admin job in order to train full time, with a view to taking part in the 2022 Beijing Winter Olympics. Olympic medallists Lizzie Yarnold and Laura Deas were both on the same programme. Rachel feels it’s very inspiring to be part of their team and she's already received helpful advice from Lizzie (who, interestingly, went to the same athletics club as Rachel).

Rachel is progressing well in her training. Ever since her first attempt at skeleton she's wanted to go faster and faster. Her fastest speed now is 131 km/hour (approximately 88 miles/hour); at big corners there can be sharp turns and she's reached gravitational-forces close to 5G - which means she has to do special exercises to strengthen her neck. Each sled is set up personal to the individual.

Rachel is accomplished at knowing how the sled works. The initial push has to be right if you want to avoid ‘popping the spur’ (the grooves in the track). Even a slight movement can take the sled off course and lead to a bumpy ride. Steering relies on athletes using their head, shoulders, knees and toes (‘Just like the song,’ says Rachel). The latter is the quickest – which means the special shoes they have to wear get worn out very quickly, Rachel is getting through them fast. And although she has a helmet and suit, Rachel still describes the experience of doing the skeleton as ‘going head first, downhill, on a tea-tray, without brakes’! All-in-all we were very impressed to hear of Rachel's achievements. Rachel describes herself as hard working, not giving up and liking a challenge - and we certainly agree!

After Rachel's talk Simon Dolby spoke of quite another challenge - that of improving children's health and literacy. Simon is Chief Executive of the Kent Messenger (KM) Charity Team (which, although connected to the Kent Messenger media group, is totally separate both legally and financially).

The Team supports a number of activities, many of which are educational. For instance, they work with Kent County Council (and, since their acquisition by Iliffe Media Ltd, other councils as far away as Norfolk and Suffolk) in a 'Walk to school' initiative formerly known as the 'Kent and Medway walking bus group'. Publicised with a cartoon character created by a student at Barton Court School, these 'walking buses' are a fun, healthy, safe and sustainable way of travelling to school. At present around 140 primary schools are part of the scheme. It serves as a green travel initiative - in places without the scheme it's estimated school run cars account for almost one-third of urban term-time traffic. Last year there were around 700,000 'green journeys'. Getting youngsters to walk to school also encourages a healthier way of life and helps tackle obesity. In relation to this the Team has also started a children's Masterchef-like initiative so that youngsters think about what they're eating.

Another initiative from the Team is Buster's Book Club, which encourages youngsters to read. The Team's view is that literacy underpins everything. In fact it's been shown that a high proportion of homeless people and prisoners have poor or non-existent literacy skills. Buster's Book Club aims to help improve child literacy by encouraging children to read for pleasure at home - and three challenges keep youngsters and their families engaged: (1) Reading class of the week (2) An interschool reading competition with winners getting prizes including tickets to Leeds Castle or a celebrity story teller (e.g. Mr Maker Phil Gallagher, singer Cheryl Baker, The Lord Mayor, or author Nick Butterworth) and (3) the Reading Millionaire's Club, which challenges youngsters to collectively read for one million minutes.

Buster's Book Club Scheme is already proving very effective at involving parents in their children's reading and at engaging pupils - especially boys. The KM Charity Team are also involved with a whole host of other initiatives and events - including Dragon Boat racing and abseiling.

Finally, if two speakers weren't news enough for our Club, we were also delighted to host a special guest from Australia, namely Drew Fitzpatrick, Past President (2015-2016) of the Rotary Club of Lower Blue Mountains in New South Wales. The Club has 60 members (40% of which are female) and two of its many initiatives and activities are 'Paint the Blue Read' for small children and a 'Young at Heart' Christmas luncheon for senior citizens. Drew kindly handed a Rotary pennant from his club to our President Sharon Jordon; the pennant is decorated nicely with a bright red Waratah flower - the State symbol of New South Wales. It was lovely to meet Drew and we hope he will stay in contact with us and update us on his Club's work and activities.

Click to find out about the The KM Charity Team

Click for more about the Rotary Club of Lower Blue Mountains

Further pictures are also available on our Facebook page