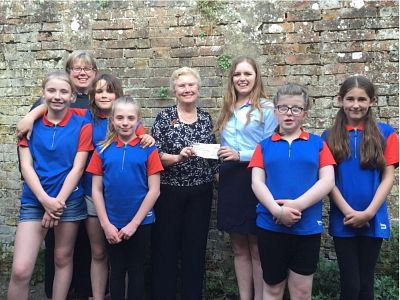 Thanks to our support, a young Assistant Guide Leader, Kara-Jane Senior, is able to buy walking boots for her fundraising trek in Peru.

As well as donating to charities direct, it's nice to be able to encourage others in their charitable efforts. Recently our Community Service Committee agreed to donate £160 to Kara-Jane so that she can buy the walking boots that she needs for a Girlguiding UK charity walk. Kara-Jane was selected by Girlguiding UK to trek the Inca Trail to Machu Picchu in October - the Trek is itself raising funds for Girlguiding UK.

Kara-Jane has to raise funds for all the equipment that she needs to buy for the trip  - she's also raising the cost of the flights as well.

Rtn Maxine Blades, who is also a member of the Trefoil Guild, presented Kara-Jane with the cheque. Other members of the Harbledown Guide Unit were also present, including Guide Leader Helen.

For information about Kara-Jane and the trek, visit her fundraising page here.

Kara-Jane was very appreciative of the money which she described as "amazing". She sent her thanks to the club via Maxine. She hopes to send us some photos once she has completed her trek, so do keep a look out for an update!

Supporting Kara-Jane's efforts, Maxine said "Young women such as Kara-Jane who volunteer to lead a Guide Unit need to be recognised and supported in the great work that they do". Maxine also told us that she had a lovely time visiting the Guides - it brought back happy memories of when she was a Guide and also a Leader herself!