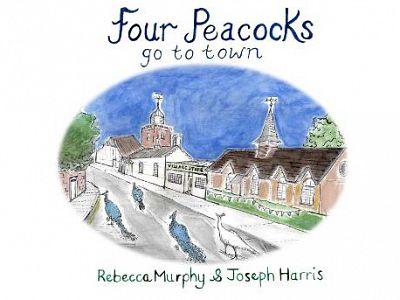 Those of us who remember "Jackanory" were transported back in time when authors of a lovely new children's book, Four Peacocks Go To Town, spoke to our members about how their wonderfully illustrated book came about.

We were joined at our Zoom meeting by the authors Joe Harris and Rebecca Murphy (who also did the beautiful pen, ink & watercolour illustrations in the book). The book, Joe told us, "literally changed our lives".

It all started one spring morning back in late April, "when the world was reeling and trying to work out what coronavirus meant". Lockdown was in place and the streets of Deal (where Joe and partner Rebecca live) were silent. The virus was dominating the news, and people had become scared of one another.

One morning Rebecca - who is an artist, illustrator and trained teacher - was sitting at the front of her house drawing bluebells when four peacocks walked casually past her front door. The sight was so unusual she ran out of the house (without shoes on her feet!) calling out for Joe. That was the moment that four peacocks became part of their lives.

It turns out the peacocks weren't some magical illusion, but that they normally lived in a tiny village called Sholden on the outskirts of Deal. Funnily enough, they lived in a house called "Peacock House" and had wandered into Deal because the streets were empty and there were no cars on the road. The troupe of four "just kept walking and walking" and, Rebecca added with a smile, "flying a little bit".

The peacocks caused quite a stir locally - and turned out to be a bit of a nuisance too. They "broke into" a car showroom and had the police after them. Apparently, they attempted to evade the long arm of the law by jumping up onto the cars. The birds spent around two days in Deal - sitting on the gables of Griffin Street and admiring themselves in the reflection in windows of local shops.

Inspired by their antics, Rebecca started drawing the birds - soon she had a pile of pictures. Drawing them was quite a change for her, as normally she only did black & white architectural buildings - but having seen the birds "and all their colour" she just had to add watercolour to her pen and ink.

This was where Joe, who writes poetry and articles for satirical magazine "East Kent Mockery", came in. He refers to himself as an "accidental author", never having had any plans to write a children's book. But he added words to Rebecca's drawings, and soon the two of them had a formed a charming little story.

Things then took off rapidly! They first saw the peacocks on 29th April; the idea for a book came at the start of May, and by June 1st the couple already had 40 odd illustrations and a poetic story in place. They decided to self-publish 200 copies. Describing the moment that the first copies of the book arrived at their door, Joe said "it's just so exciting to see your dreams coming into reality".

The pair thought they might sell "the odd copy here or there", but having set up a facebook group the orders soon started rolling in!

Joe and Rebecca have made a lovely little video of the story - narrated by Joe - which they showed to our members. Through this we learned of the escapades of the four peacocks, Victor, Prince, Gilliver and a white peacock, Crystal. The story told the tale of the four wandering into Deal, musing at the lack of people. Along the way they meet some other creatures including a fox and pigeons, before finding out from the wise owl what had happened.

Now, Joe & Rebecca have sold over 1,000 copies - and that's without an agent or a book deal. In fact, they have in turn set up their own publishing company: "Four Peacocks Publishing", naturally!

Both are now busy with that and with a follow-up children's book - "Four Peacocks at Christmas". This time the book is not set in Deal (so will have wider appeal), and will be a nice little treat for youngsters (and the young at heart) at Christmas.

If you would like to watch the video or find out more about Four Peacocks Go To Town, you can visit the web site here. Those who are in Deal can visit the pop up shop that the couple have at their house most Saturdays.