Evening talk: Neil Fraser, How we are improving the environment 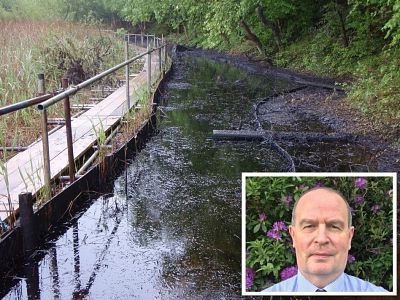 We hear a great deal about the environment these days, but often the positive changes that have been made over recent years get overlooked in the deluge of negative news. So it was great to hear from PP Neil Fraser about projects that he's worked on.

Neil was able to use his 25 years’ experience of working in environmental engineering, providing engineering solutions to a wide variety of issues, to inform his talk.

Telling us he was "going to take us on a bit of a journey", Neil emphasized from the outset that this would be an optimistic journey and not touch on issues such as climate change which remain very important.

Using a range of case studies across the UK, illustrated with lots of photos, Neil was able to highlight a variety of environmental engineering activities that have made a great difference to local communities.

Our journey started at a large contaminated site in South Wales . The industry had closed, but the land in the large site remained heavily contaminated. Neil emphasised how, nowadays, the onus is on developers that take on a site to make improvements such as cleaning up contaminated land, subsidising less polluting public transport and substantially improving natural habitats when starting new developments. A variety of modern techniques were used to improve the environment at the site. For instance, where once the oil and hydrocarbon waste at the site might just have been "dumped" or leaked out over many years, a process called "bioremediation" was used instead to reduce contamination. (In this process, "friendly" bacteria "eat" the waste, processing it into water and harmless gases which are released back into nature.)

As well as this, over 100 km of pipeline and cable was removed from the site; more than 200,000 tonnes of concrete was recovered, much of it used as recycled hardcore for highways. Enough oil to fill around 9,000 cars went through a recycle and extraction process, and a groundwater drainage strategy that supports a nearby site of international wildlife importance was put in place. In short, the excavated waste material is now being safely and economically used in the construction of new industrial and housing sites. Champion of the environment, Prince Charles, even gave the site a visit.

From Wales we travelled to the coast, and areas of unstable coastline resulting from sea erosion. Neil told us how engineers helped to stabilise the land in such a way as to actually improve the local environment. Neil's pictures showed how, while the work is ongoing, the engineering interventions look pretty brutal - lots of machines and metalwork. But once stabilised, the land becomes a place where a variety of flora and fauna can live and thrive.

We travelled next to Gainsborough in Lincolnshire, to talk about flood defences. The area is relatively low lying, so is prone to flooding. A common solution is to build flood banks, traditionally of clay.... yet in Gainsborough, these banks have been made using waste materials such as plastic window frames that would otherwise have gone to landfill. This also gives greater stability to the flood banks; the resultant slopes can last for a hundred years.

The next "stop" in our journey was the urban environment of Bewdley in Worcestershire. Here, the challenge was how to protect the area from flooding (it lies near the River Severn) without erecting unsightly concrete walls? The solution was a rubberised barrier than can be erected and removed rapidly - a solution that is quick, effective and cheap.

Turning to the issue of waste management, we learnt that at one time all waste in the UK went to landfill. Neil described this as, in effect "throwing away quality resources". Moreover, associated issues of pollution and the build-up of gases at landfill sites were long ignored. Things came to a head, however, in the 1980s due to an incident that took place at the village of Loscoe in Derbyshire. Basically. a build of gases from a nearby landfill had caused a bungalow to blow up. This, and increased awareness, led to greater attention being given to how landfill was stored and how recycling can be used to a greater degree to minimise landfill disposal of waste.

Since then, the UK has undergone a massive change in waste management. Nowadays many places have municipal recycling facilities which are able to recycle a variety of waste; at some sites, waste is even hand-picked. Overall, this recycling leads to better use of waste. As an example, grass and green waste is used to make compost and the gases that arise are used to generate electricity. Now, around 50% of waste in the UK is recycled - a massive change from the 1980s.

Neil showed a graph comparing recycling by country. "We're doing pretty well," said Neil, although we still lie behind countries such as Germany and Austria. However, there are difficulties in making country comparisons. Countries with large urban populations have a bigger challenge - consider how to collect and separate waste from dense populations living in flats. Nevertheless, millions of pounds have been saved so far.

Neil's next slide went on to talk about the coal industry. Despite coal mining having decreased massively, the UK is still spending money to deal with the environmental fallout. Neil briefly touched on the disaster at Aberfan in South Wales in the 1960s - when coal slurry had come down a hill and swamped a local school, killing many young schoolchildren and their teachers. Again, it was a disaster that "woke" the UK up to the lack of mining regulations. [The report of the Public Inquiry, Neil told us, makes a interesting read]. To illustrate how things have moved on, Neil spoke of how, in a valley in Wales "where it rains all the time," stabilisation had been achieved through improved drainage, the planting of trees (which stabilise slopes) and so on. Neil also spoke about water that permeated from the mines resulting in areas high in ferrous oxide which can kill fish. The solution? Tall reed beds - "nature's way of cleaning things up," said Neil.

The next stop in our journey was further afield - Transylvania in Romania. Pictures showed mine waste piling high above a village (much like Aberfan); remedial works included slope stabilisation and improved drainage. The village is now a tourist destination.

Returning to the UK Neil gave us other examples of how things are improving. For example, the share of electricity generated by coal has decreased while that from wind farms and other sources has increased - the other sources covering things like solar panels/photocells (such as at the local site in Sandwich). "It's getting better every single year," Neil said.

Neil touched on other improvements since the 1980s. For instance, the miles per gallon for a car has substantially increased, plans for rail investment (e.g. HS2) will increase rail capacity (more environmentally friendly than road use), and huge amounts of trees have been planted. (It turns out the biggest planter of trees is Highways England). Finally, using visits to Blackpool in his childhood to illustrate his points, Neil touched on how bathing water quality had improved substantially in recent years.

In summary, Neil's talk showed how the change in the UK's waste management strategy has led, over a relatively short time period, to the UK having stopped dumping waste in landfill and now recycling much of its waste as well as generating a substantial amount of power from the material.

The timing of the talk is particularly apt as Rotary has recently added "protecting the environment" as a new cause. It's good to know more about what the government in the UK is funding from Neil's talk.

Questions from our Members were numerous and seemed to focus on a strong interest in waste management and how recycling could be improved by individuals, and what the Club could do to improve the environment. The talk certainly gave our Members some food for thought; of course, our planned water-bottle filling station is one way we hope to help reduce plastic waste.

The vote of thanks was given by President Alan Mepstead,

Picture: Oil leaking from a former oil refinery which has now been cleaned up and treated by bioremediation, rather than taken to a dump; inset, PP Neil Fraser. Picture credit: Neil Fraser/Rotary Club of Canterbury.

With thanks to Neil for help with drafting this article.