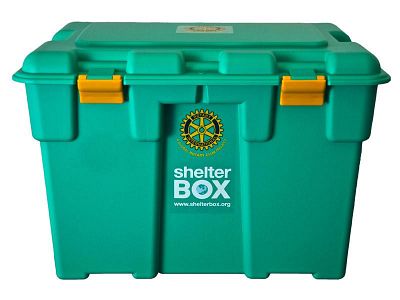 Yesterday our members, supported by volunteers from the Rotary Club of Canterbury Sunrise and Canterbury Inner Wheel, did a great job collecting for ShelterBox, one of the charities helping those affected by Cyclone Idai.

The Cyclone has caused terrible death and devastation and affected thousands of families, many of which have lost their homes and their livelihoods.

The total raised from yesterday's collection was close to £340; this brings the total from the two collection days (we had an earlier one at the end of March) to around £720. We have also received some very generous donations from Club members.

Viv Pritchard, Chair of our International Committee is heartened by the response and is confident that we will have raised sufficient funds to pay for another three ShelterBoxes, to add to the one box we have already paid for. "To put this in human terms," Viv says, "four families in southern Africa who have been left destitute after the disaster will have decent shelter and the means to start rebuilding their lives over the coming months."

We would like to thank all the members who volunteered for the collection, including members of the Canterbury Sunrise Club and the Inner Wheel, as well as the generous people in Canterbury who kindly supported us with their donations. Without everyone's help, this excellent result would not have been possible.

Don't forget that you can also make a direct donation to ShelterBox and find out more about their work via their web site: https://www.shelterbox.org/