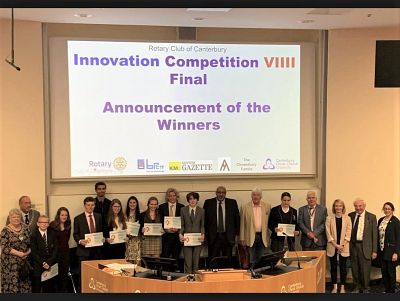 We are delighted to announce the winners of this year's Rotary Club of Canterbury Innovation Competition, with the 1st prize going to Toby from King Ethelbert School for his "cybornetic hand" Well done!

Once again the Innovation Competition Final was held face-to-face, with all but one of the 10 shortlisted finalists presenting live to the audience before them at Canterbury Christ Church University (CCCU). Our Members and invited guests were joined in the audience by the schools (teachers and students) plus the Lord Mayor of Canterbury, Councillor Anne Dekker and the Lord Mayor's Consort, Ken Dekker.

The Innovation Competition is open to youngsters from secondary schools (or equivalent) in Kent, Sussex, Surrey and Essex and aims to engage young people with STEM - science, technology, engineering and mathematics. Over the years we have had some very diverse but interesting entries!

The Competition was initially conceived by Rotarian Brian Dobinson, who still puts in a great deal of effort behind the scenes to encourage schools to take part and to organise the events under the umbrella of our Vocational Committee. This is the 9th year that our Club has run the competition and, as we have done in recent years, it was run in partnership with CCCU.

This year we had fewer entries than usual, but this came as no surprise given the upheaval in education over the past couple of years. Nevertheless, our judges (Professor Mohamed Abdel-Maguid, Professor Rob Lucas-Gardiner, PP Neil Fraser and Rtn Dr Julie Reza) struggled to decide on a shortlist and to decide on the final winners.

The event was opened by Professor Abdel-Maguid on behalf of CCCU; he welcomed everyone to the University in this, their Diamond Jubilee year. Tony Loughran, our new Club President, also welcomed those attending the Final, and commended the finalists and their teachers on getting this far.

During the Final, each finalist introduced us to their innovation in a 5 min presentation in which they outlined the problem they wished to solve and their innovative solution. It was interesting to learn what had inspired the youngsters to come up with their idea, to see the research they’d done on competitors and materials, and to hear their thoughts on costs and marketing. After each presentation the judges asked questions about the innovations.

While the judges went away to deliberate the winners, Dr Gary Robinson, Lecturer and Senior Commercialisation Manager at the University of Kent, gave a presentation about taking innovations forward.

Chair of the judges, Dr Julie Reza, then announced the winners, starting with the winner of the Chowdhury Prize. This is a prize usually given by her family for an innovation that will help global health. As none of the entries this year fully filled the remit, the prize was awarded to Queen Elizabeth's Grammar School in Faversham (QEGS) in recognition of the fact that 6 of the 10 finalists came from the school; the school was asked to spend the money on something that would engage youngsters in Global Health.

The three winners were then announced in time-honoured reverse order:

Aside from the three prize winners, all presenters speaking at the final will receive a consolation prize.

All four judges were impressed by the thought that the youngsters had given to topical issues such as wellbeing and sustainability. Some of the youngsters had been inspired by things they'd seen, or difficulties they had experienced themselves; one had mocked up a prototype.

Speaking on behalf of the judges, Julie addressed the presenters: "You should be rightfully proud of your achievements, particularly so because we know it’s been a hard couple of years for many of you and for your teachers." She added: "We hope that you will feel inspired by having taken part in this competition, and that you continue to feel inspired by the things that you see around you" before wishing the students well with their future studies and careers.

The Lord Mayor also gave a short address, referring to her own teaching experience. Looking out across the audience she spoke of "youngsters who have a vision". "We want you to carry on," she said, "we value all of your efforts. Please don't stop! You are the future. You are also your children's future."

President Tony Loughran then wrapped up the event with a thanks once again to host CCCU, to the students and other attendees, the judges, sponsors, and all others involved in organising the competition.

The other finalists were: