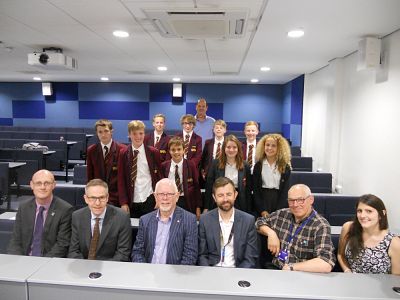 The final judging of this year’s competition, which was organised by the Club and supported by Kent Innovation and Enterprise, the Kentish Gazette and, prize sponsor, the Brett Group, took place at the Canterbury campus of the University of Kent on 29th June.

A total of 43 entries, lodged by some 60 students (some acting collaboratively), had been received, comparing well with 13 and 32 entries respectively in each of the two preceding years. The students, who were all aged 13 -14, had submitted their entries on line. Each entry had been scrutinised and written enquiries had been raised, aiming to clarify what was being proposed, and a preliminary meeting of the judges had considered all the written material and selected 8 submissions whose authors were invited to make oral presentations at the judging final.

In the event, some 37 students and their teachers attended the final which was judged by Marcus Wright, Enterprise Manager and Dr Gary Robinson, Senior Commercialisation Manager, both from the University, and Rotary President Martin Ward. First prize of £300 was awarded to 13 year old Joseph Billington of Simon Langton Boys’ School , a keen kayaker and diver, who had been plagued by loss of his nose clip when under water, and whose brilliantly simple solution of attaching it to his goggles was presented in an impressively confident manner. The second prize of £100 went to Elliott Palmer and Harri Roblin,also of Simon Langton school, for USB+, a USB storage stick incorporating a small screen capable of showing both the amount of storage remaining and the existing contents of the stick without plugging it into a computer.

Dr Gary Robinson addressed the students on the importance of ideas, and outlined how to protect them. Bill Brett, Chairman of the Brett Group, having kindly given up his morning to attend the event, presented the prizes and certificates with Martin Ward and, in giving his overall impressions of the event, praised the ingenuity of the entries.

Light refreshments were served by Rotarians Deborah Connolly and Hilary Bryan, and they and all others involved in the event, which was attended by 5 other Rotarians, were thanked by Martin.