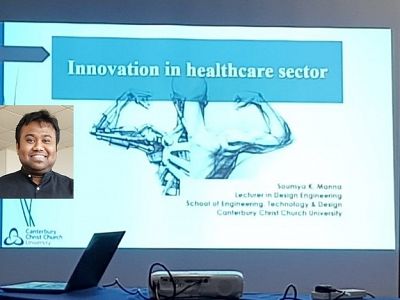 Our members may have felt they'd entered the world of science fiction when Canterbury Christ Church University (CCCU) lecturer Soumya Manna came to talk to us about his cutting-edge research in healthcare using robotics, biosensors and exoskeletons!

Soumya is a skilled engineer in the field of "mechatronics" - an exciting field that combines mechanical and electronics engineering. He was introduced to us by Rotarian Brian Dobinson, after having captured Brian's attention at a recent CCCU STEM (science, technology, engineering and mathematics) event.

Soumya, who is originally from West Bengal in India, started his talk by telling us a little bit about his background and career. He describes himself as "a design engineer, but specializing in the biomedical field".

After graduating with a Bachelors degree in technology, Soumya studied for a Masters in mechatronics at the Indian Institute of Engineering, Science and Technology, India. He served in the capacity of Assistant Professor for few years at the College of Engineering and Management in Kolaghat, India and ITM University, India. In the interim, he also co-founded a mechanical components company called Shilpa Innovation. In 2016, he started pursuing his PhD in the domain of design and engineering with a major in medical robotics from Bournemouth University, UK. Being on the verge of completing his PhD, his "intrinsic urge of obtaining and sharing knowledge paved his path" and now he is working as a lecturer at CCCU.

Soumya's specific area of research focuses on the development of an exoskeleton for post-stroke rehabilitation, which can aid patients to overcome muscle plasticity and recover movement following a stroke. He outlined the problems that are faced by healthcare systems that make his area of work significant - a limited number of staff, a lack of personnel with the necessary skills and experience, the high cost of physiotherapy, and the length of time required to provide the intense, specialist care that patients need during their recovery.

His approach is to build a mechanical, portable exoskeleton device with inbuilt sensors that may aid the process of multistage post-stroke rehabilitation - from acute to the last stage of recovery. It's an area of research that he started during his Masters and continued during his PhD. The field is exciting and relatively new. In the USA and Japan, there has been good progress - however, such cutting-edge technology has not yet been fully implemented in UK hospitals.

Soumya and his colleagues are in conversation with Kent & Canterbury Hospital about his particular project - the development of an elbow exoskeleton to improve the movement of the human arm. He has already developed a working prototype and aims to develop a state of the art commercial device in the next two years for post-stroke patients.

Soumya showed us a very interesting video of how the "wearable" exoskeleton might work with an Xbox game using a Kinect Sensor (motion sensing device). Explaining that normal exercises can be quite boring for patients, Soumya told us that technology may help  to keep patients motivated in an interactive platform. He would like to make his device affordable for the general public once it is produced on a larger scale.

In essence, Soumya summarizes his work as "a reliable and efficient way of using an engineering solution for complex medical problems". He also told us about his other research project - a force plate. He explained that sometimes it's difficult for a doctor to identify why a patient is limping (or has a certain "gait"). The plate that he developed has force sensors that will measure gait analysis.

Soumya ended his talk with an overview of engineering at CCCU, telling us that CCCU had secured £13.7 million in government funding that will allow the University to grow in the engineering field across the south-east region of the UK. In 2019, the University became a member of the International CDIO ("Conceive-Design-Implement-Operate") engineering initiative, an initiative pioneered by MIT (The Massachusetts Institute of Technology). CCCU is also contributing to the Engineering, Design, Growth and Enterprise (EDGE) Hub for Kent and Medway, and they hope soon to start some innovative projects with the new medical school. The engineering team now has experts with a variety of expertise - robotics, product design, manufacturing, electronics, biomedical engineering and computing.

In the concluding part of his talk, Soumya addressed a number of questions from the floor from Rotarians inspired by his research work. We hope to perhaps hear more about his work in the future.