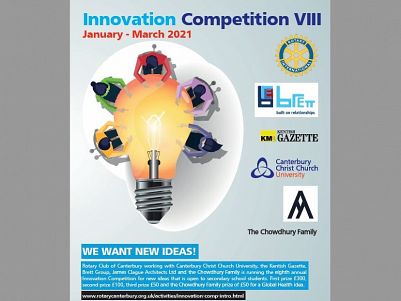 It is with great pleasure that we announce the winners of this year's Innovation Competition, with the top prize going to Ellis from Simon Langton Grammar School for Boys for his soil tester! Well done!

The final event, held live online, was attended by schools (teachers and students), guests, (including finalists’ family members), Rotarians and many others. The Lord Mayor of Canterbury Councillor Pat Todd also attended, while Dr Gary Robinson, Lecturer and Senior Commercialisation Manager at the University of Kent, gave a presentation about taking innovations forward.

This is the 8th year our Club has run this popular competition; this year, as in recent years, it was run in partnership with Canterbury Christ Church University (CCCU). The competition was open to secondary school-aged youngsters from schools and colleges across Kent, Sussex, Surrey and Essex. We received 108 entries in all and it was a challenge for our panel of judges, Rotarian Dr Julie Reza (Chair), Rotarian and Past President Dr Harry Cragg, and CCCU Senior Lecturer/Outreach and Recruitment Coordinator, Dr Ernesto Hernandez, to whittle that down to the 10 finalists for today’s event.

The finalists were invited to give a live presentation to the judges and the online audience. Everything was done via Microsoft Teams Live Events – a new experience for the youngsters, organisers and for the judges! Despite some technical gremlins it was a great event, with all the finalists giving excellent presentations outlining the problem they wish to solve and their innovative solution – each finalist having given careful thought to competitors, materials, costs and marketing.

The event was opened by Dr Hellen Ward from CCCU and the President of our Club, Alan Mepstead. Each finalist then had five minutes to present their idea before being asked some probing questions by the judges.

The winners are listed below with a summary of the judges’ feedback (as relayed by the Chair):

The judges thought Ellis gave an excellent presentation and were impressed by the thought he had put into his innovation, including the way in which his “all-in one” soil tester – deemed useful to adults and youngsters interested in gardening – might be used. He also gave careful thought to design, materials and environmental impact. The latter was particularly important given his product was to help people grow plants and help the environment.

The judges also liked Neave’s simple but very useful idea which was nicely illustrated and presented well. It was interesting to learn how and why Neave had come up with the concept. The judges felt that Neave’s idea had great potential use - one judge even said they would need one themself! The judges liked the way that Neave had given thought to design and practicality and how she had considered her product’s superiority over competitors in terms of design and functionality.

The judges felt that Wilf’s idea was very well presented and all three felt that it could have real, potentially life-saving use in the developing countries at which it is aimed. Wilf had considered ways to boost the still in poor sunlight. The judges were impressed that Wilf had made a working mock up in his home to test the principles of how his product might work (even with the relative lack of sunlight in this country!)

The judges all liked this neat little idea and again could see a real need and use for it. It is a classic example of an idea so nice and simple that it is surprising no one has yet come up with a similar device. Charles gave a clear presentation which gave thought to products that were already available; the judges could certainly imagine using the product on a cold, wintery day!

In addition to the main prizes above:

Julie, whose family sponsored the Global Health prize, was delighted with Wilf’s entry. The aim of the prize was to encourage young people to think about Global Health. “At the time that the prize was originally conceived we had no idea just how much Global Health would affect us all,” said Julie. The judges felt that Wilf’s idea has the potential to save thousands of lives given that, globally, at least 2 billion people use a drinking water source contaminated with faeces, and contaminated water can transmit diseases such diarrhoea, cholera, dysentery, typhoid, and polio*.

All other presenters speaking at the final will receive a consolation prize.

The judges want to re-iterate the challenging job that they had in deciding on the winners, even more so than in past years; all the presentations were deemed of high quality. The judges would like to give a special mention to Kelsey from King Ethelbert School – one of the youngest competitors who not only submitted a video but also created a prototype of her concept for a special glove for dog-lovers.

The other finalists were:

Normally, the Lord Mayor would have given prizes to the winners in person; sadly this was not possible this year. Instead, the Lord Mayor gave a short speech in which he congratulated all the presenters, especially the three winning entries, on the quality of their talks and ideas. He joked that perhaps the youngsters might find an innovative way to overcome any technical gremlins in future competitions!

Summing up on behalf of the judges, Julie said: “We’re always excited by the variety of entries, but this year we were particularly pleased as we know it has been a truly extraordinary year for everyone. We know many of you [entrants] have had to face new challenges, and that some of you haven’t had access to the technology, libraries and support that you might normally have.” Julie added "A special note of congratulations to Simon Langton Grammar School for Boys - 5 of the 10 finalists, and 3 of the winners -  were from that school".

The final speaker at the event was President Elect of the Rotary Club of Canterbury, Stephen Thompson, who thanked all attendees, thanked our sponsors (the Kentish Gazette, the Brett Group, James Clague Architects and the Chowdhury family), and thanked the Vocational Committee at our Club (in particular the Chair, Mary McGeary, and “Mr Innovation” Brian Dobinson.)

Our grateful thanks also go to Dr Hellen Ward and James Bennett at CCCU. There was an excellent team working behind the scenes compiling competition entries and managing the technical side of things. Not only did they have to juggle schools and presenters, they had to oversee safeguarding issues. “This has been the most technical meeting we have run so far,” said James, who had to coordinate speakers, microphones, phones, cameras, presentations and the organising team during the final.

We hope that taking part in the competition will inspire all the participating youngsters to think innovatively in their future careers. Who knows, perhaps one of the ideas will make it into production? Watch this space!

Picture: Part of the 2021 poster for the Innovation Competition. Picture credit: Rotary Club of Canterbury/CCCU.