An invite to the Rotary Club of Dhaka's 85th Installation 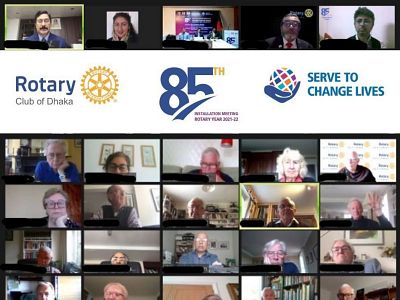 Some of our Members had an invitation from the Rotary Club of Dhaka to join their 85th Installation on Tuesday. It was a good opportunity to reinforce the link between our two Clubs.

Unfortunately, the timing clashed with an important business meeting so only one of our Members was able to attend. The link between our two Clubs was initially made through our Club being able to help with some of the Dhaka Club's projects - most recently to set up a covid testing lab at the National Cancer Institute & Hospital in Dhaka, Bangladesh.

Although held on Zoom there was an impressive number of attendees - counted as 212 on screen at one point (and that doesn't include those who were doubling up at home with partners/family).

The President of Rotary International, Shekhar Mehta of India, was due to be Chief Guest but sadly could not make it because of a bereavement in his close family. Director General of District 3281, Rtn Barrister Mutasim Billah Faruqui, gave a speech as Guest of Honour. Outgoing President Rtn Barrister Shafayat Ullah and Dhaka Club Members were praised on their successful year - which included setting up the aforementioned lab. Incoming President Rtn Abu Nawaz Bhuiyan has a busy year ahead planned and our Club looks forward to further interactions.

Meanwhile, back in the UK we had a well-attended Zoom Business Meeting, the first under our new President. Rotarians are keen to attend Business Meetings whenever they can, but our Members were somewhat astonished to see one of our Members join the Zoom live from his hospital bed in Margate! A Member asked how he was doing, to which he wryly replied "Well it's a very nice hotel. The food is good ... and there's LOTS of supplements!" We wish him well in his recovery.