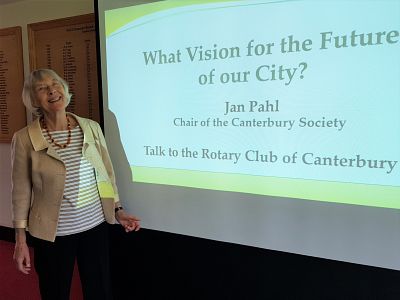 The Canterbury Society is concerned with “maintaining and enhancing the quality of life” in Canterbury, so of course its activities are of great interest to our Members. Therefore it was a pleasure to hear Jan Pahl’s talk recently.

Jan is Professor of Social Policy at the University of Kent at Canterbury (UKC) and currently is also Chair of the Canterbury Society.

In essence, the Canterbury Society is a civic society that cares about our city. For instance, it’s involved in preserving the heritage and history of local buildings – it runs the Heritage Open Days and comments on planning developments. It works to reduce congestion and air pollution and helps improve public spaces through the planting of trees and flowers. The Society campaigns for parks and playgrounds and helps clear litter and graffiti. It also hosts public meetings about issues in Canterbury that may affect residents and visitors. It also runs a Design Award to recognize good buildings and open spaces (27 nominations at present this year). The Society itself has been going since 2008 and its activities are overseen by an active 12-Member Committee led by Jan. Currently the Society has around 500 members.

To illustrate some of the things the Society is involved with, Jan showed a picture of St Dunstan’s. She told us that St Dunstan’s Street is a truly historic street – it is the oldest continuously-used street in Britain. Jan touched on issues of illegal parking, air pollution (often higher than local limits) and traffic jams. She told us of the underpass that belongs to Network Rail but needs renovation, and mentioned concern over the proposed multi storey car park at Station Road West, and the need for a better, integrated public transport ‘hub’ at the station.

In 2013 the Society published a Vision for the Future of our City, which covered topics including Canterbury’s economy; housing and community; tourism, culture and leisure; safety, transport and the environment; and Governance/local democracy. Several impacts may have resulted from the Vision's recommendations. For instance, the City Council has set up a Sustainable Transport Forum and Professor Stephen Peckham from UKC is conducting research into air quality. Canterbury City Council has changed its Executive system for a more democratic Committee system, which might have resulted from residents raising concerns about the system through the Society.

The Canterbury Society is now developing a new Vision to be published in 2019, based on a questionnaire posted on the Society’s website and distributed as widely as possible (the deadline for feedback has now passed). The new Vision has to be ‘a vision for all’, and the Society is keen to reflect what residents are interested in. Learning from the first Vision, the Society is working with as many groups as possible (including seeking the opinions of Rotarians); it is also aware of the importance of getting opinions from lesser engaged groups such as youth groups. The authors have all been assigned specific areas, with Jan’s being crime and antisocial behaviour.

Ultimately, the Vision’s recommendations have to be realistic, credible and constructive, and developed in discussion with potential implementers as their support is needed for any action. The Society aims to produce the Vision before the local elections in May 2019.

In the meantime, the Society continues its other activities, such as running the very popular (but costly) Heritage Open Days and organising events. (Two upcoming events include a talk on the health and welfare of young people in November and the Canterbury Design Awards, which will be presented in January).

The Society is always open to hearing from Residents about matters that are important to them.

For more information about the Canterbury Society.

You can view a copy of the previous Vision here.