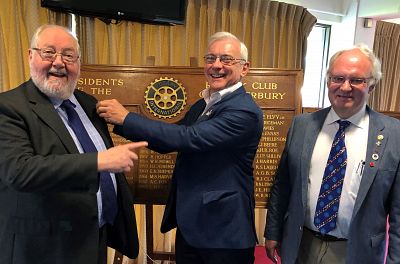 It was a great pleasure to welcome our latest Member, Jim Gascoyne, during our business meeting the other day.

Jim was proposed for membership by Past President Philip Abbott PHF, who reminded everyone that "it is through your actions that you become a Rotarian". After being inducted by club president Stephen Thompson, Jim spoke warmly of Bob Anderson, the Rotarian who had initially encouraged him to join our club; sadly, Bob passed away earlier this year. Jim then told us how he really looked forward to "being a full member of the club". He was welcomed with a round of applause. Here we give a little bit of background about Jim.

Jim is not at all new to Rotary - in fact, he was a founding member and president of our fellow Canterbury club, the Rotary Club of Canterbury Sunrise, and before that he had been a member of the Ramsgate and Sittingbourne clubs.

He grew up near Sittingbourne and lived for some time in Selling (near Faversham) before moving to Canterbury in 2002. As a school leaver, Jim joined VSO and worked on agricultural projects in Nigeria, which led, a few years later, to his working at a specialist bank in the City, financing imports into East and West Africa. Jim is a former member of the Chartered Management Institute.

In 1988 Jim qualified as an English language, negotiation and cross-cultural awareness trainer working with politicians, business executives and civil servants across Europe and the Far East.

We warmly welcome Jim to the club and look forward to working with him on future activities.

Picture: Jim and Stephen have a jovial exchange while Phil looks on. Picture credit: Martin Ward/Rotary Club of Canterbury.