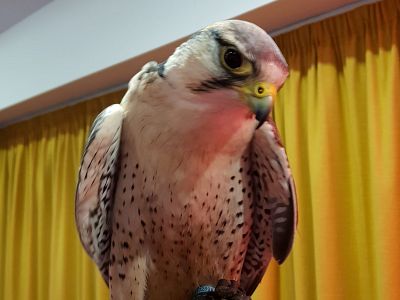 The presentation at our Guest Evening last week went right over our heads - quite literally - when we were treated to a wonderful display of birds of prey in action!

We had plenty of Rotarians and guests at the event in the high-ceilinged Harris Room at the cricket ground in Canterbury; even before we entered the room we knew were in for an exciting evening as we could hear the birds from quite a distance!

Our President Stephen Thompson introduced presenter Joe [surname] and his colleague Phoebe to us.

Joe, who used to be a climbing instructor among other things, now runs “Joe’s Bows” with his wife. Their business focuses on archery and bird displays – including displays to introduce various birds such as falcons to youth groups and schools. He told us they have 18 species of birds in total, including owls, kestrels, a kite and even two caracaras (carrion hawks) that they are hoping will mate!

Throughout his presentation Joe gave us snippets of information about his birds, bringing out different birds from their large black boxes during the course of the evening. At several times he passed a leather glove to audience members while birds would fly from him or Phoebe to the gloved person.

First, Joe told us a little about the leather gloves worn for falconry. He pointed out that when handling birds of prey the gloves are traditionally worn on the left hand – this goes back to the days when lots of falconry used to be done on horseback, so huntsmen need their right hand free to hold the reins – or use their swords! It brought to our minds images of knights and their horses.

Appropriately, therefore, the first bird to be brought out was “Lancelot” – a majestic lanner falcon with piercing eyes and yellow talons. These birds, we learnt, originate from Africa and Southern Europe and are incredibly fast – moving at speeds of up to 120 mph!

We might have thought that this was pretty fast, but next Joe brought out a lovely peregrine falcon called [??]. Peregrines, it seems, move even faster; some can reach a top speed of over 240 mph, making them the fastest animals in the world. They need to move so fast to catch their main prey – other birds. Apparently when hunting they will stoop, then fly high and wait for their favourite food to come in sight. They will then “lock on” to their prey (astoundingly, they can spot pigeons from 3 miles away away), fly downwards, tuck in their wings, and swoop to catch their prey. Joe pointed out how the talon at the front was slightly longer than the others, enabling these birds to hold on to their prey while in flight.

Joe also told us that, just like old fashioned pilots, these birds also have built-in “goggles” to protect their eyes as they fly through the air at speed: they have three eyelids. The third eyelid, a translucent one, is at the corner of the eye; it moves horizontally across the eye and works much like a shield to protect the eye from grit and other particles in the air.

Next, we were introduced to Rufus, a large long-legged buzzard. Rufus proved to be quite a character – he squawked away loudly as Joe told us all about him. Long-legged buzzards are naturally found in the Indian subcontinent, where they are quite common. We learnt that these birds can regulate their breathing while diving at speed using two valved holes just above their beaks. We were told that, as a group, buzzards are the most common birds of prey in this country. Joe pointed out Rufus’ small feet relative to his body – this means Rufus will find it hard to catch bigger animals such as rabbits. Instead, such buzzards prefer small prey such as mice – or they will eat something already dead, like roadkill. They even like eating worms in recently dug up fields – which is why they have a reputation for being “lazy”! Rufus joined Joe's menagerie some time ago from another falconry centre – "Rufus has a few anger management issues,” Joe laughingly said as Rufus squawked in protest, before Joe added a compliment: “he does fly incredibly well!"

Eva, a Harris’s hawk, was brought out next. We learned that in her world, females are "in charge" – and that they are bigger and stronger than their male counterparts. Silent in flight, Joe told us how these creatures use their tails to communicate. Basically, on landing the hawk wiggles its tail, which has a large white band, to send silent messages to their fellow hawks. We also learnt that they have a lot of power in their talons.

Next, we were introduced to a beauty, aptly called “Belle”: she is one of their [??hinyonh] birds. “She’s a little bit like a flying dog, you can take her for a walk and she’ll fly alongside you,” said Joe. We learned that all of their birds have radio trackers in case they fly further away. Joe threw some food for Belle and we saw her fly up to catch it – she missed the first couple of times but was third time lucky! It was quite an amazing sight. One of our Members joked she could perhaps pick out our raffle ticket winners! We saw her swoop lower and lower as she flew across the room, wings gloriously spread out, gaining confidence with each swoop – at one point she even sat briefly on one guest’s head! It was quite amazing to see how the birds moved in response to a whistle and gesture.

We learnt that all birds of prey have a crop (a pouch in their oesophagus). This allows them to eat relatively large animals (such as a rabbit) quickly – they can then digest the crop contents later at their leisure. It was surprising to learn that this means the birds don’t really need to eat every day. “One crop full will go a long way!” said Joe.

Next, we were introduced to Freya, a lovely kestrel. We learnt that kestrel’s are native birds and are the second most common bird of prey in Britain. Surprisingly, Freya is very light – she weighs just over 7 ounces. (By contrast, Eva, the Harris’s Hawk, weighs over 2lb.) Kestrels often catch rodents – and, remarkably, can detect their prey’s urine and follow it. “Freya is a lot more agile than Eva," Joe told us as she flew swiftly from person to person in response to the whistle.

Joe told us that all of their birds have been bred in captivity and usually come to them from zoos and private collectors. Most of the birds arrive when around 3 months old, though some are as young as 3 weeks old. The birds are trained gradually. First, the birds need to get used to their trainers, sitting out with them get them while also getting used to other things such as dogs and cars etc.

During training, the birds are initially tethered by a long, light cord called a creance. Initially, the birds are allowed to take short flights while tethered; the following day the flight with go further and then further. “It’s important to get the birds nice and fit,” said Joe. Eventually, the trainers take off the creance, allowing the birds free flight and using radio trackers instead to track the birds if needed.

Finally, Joe bought out [name??,] a beautiful creamy white barn owl with big black eyes. One of the most common owl varieties in the country, Joe pointed out barn owls have a flattish face that help owls to pinpoint sound “like a satellite dish”. Asymmetric hearing (due to one ear being higher than the other) allows them to work out distances, especially useful for catching prey. Joe demonstrated how they can turn their heads “right round”, while we learnt how they eat their prey whole, but cough up owl pellets of indigestible bits later – these give researchers (or curious members of the public) insight into the creatures that the owls have eaten!

Joe ended his talk by pointing out that their birds tend to live longer in captivity than in the wild. “In the wild they generally live only 7 to 9 years – while with us they live as long as 19 yrs. This is because they don’t have to look for food, or to worry about predators or illness!” If they fall ill, Joe quipped “I take them to a very expensive specialist. They have a life of luxury living with me!”

Joe, Phoebe and the birds were given a warm round of applause after Joe fielded a number of questions. It really was a unique experience to be so close to such lovely animals and to see them live in action.

You can find out more about Joe and his birds here: [website?]

Picture: [not sure what bird]