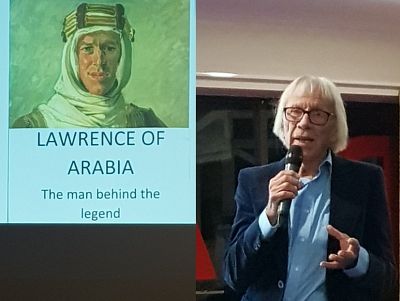 T E Lawrence, better known as ‘Lawrence of Arabia’ was a subject of a recent talk to members by noted historian John Buss.

When asked by John, almost all members could remember David Lean’s film ‘Lawrence of Arabia’ with Peter O’Toole’s dashing portrayal of the British Army Intelligence Officer working to support the First World War Arab Revolt and Sinai and Palestine campaigns against the Ottoman Empire.

Talking us through his collection of photographs, John noted that Lawrence was physically very different to O’Toole; Lawrence was only 1.66 meters tall and of darker complexion. However, the Oxford educated archaeologist had already spent much time in Syria on various digs and was well placed to work with the Arabs when war broke out. Working closely with Emir Faisal, Lawrence participated in, and sometimes led, military actions against enemy forces which culminated in the capture of Damascus in October 1918.

It was John’s description of Lawrence’s life after the war that many members found most interesting. Joining the Foreign Office, he worked on the post-war settlement with the British Government and Faisal. Disillusioned at his Government’s failure to create the promised United Arab State, Lawrence retired into private life in 1922 - only to join the Royal Airforce as an enlisted man working as an aircraft fitter. He also served for a short time as a private solider in the Tank Corps.

His service in the RAF saw Lawrence use his interest in aircraft and motor boats when he helped in the introduction of high-speed air-sea rescue motorboats.

Lawrence was also a published author with his best-know work, Seven Pillars of Wisdom, being an autobiographical account of his participation in the Arab Revolt.

His death at the age of 46 in 1935, as a result of a motorcycle accident, cut short an amazing career and John’s talk left many members speculating what contribution he would have made had he lived to serve in the Second World War.

With thanks to Maxin Blades for the draft article.