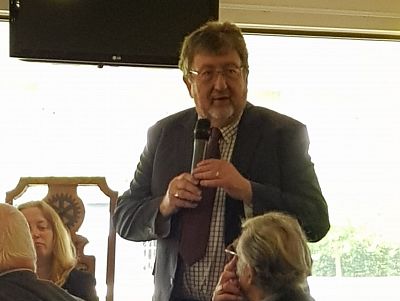 Once again we were delighted to host an interesting speaker at our lunchtime meeting on Tuesday - this time John Clayton of Hi Kent, a charity for the hard of hearing.

Hi Kent is a local charity that was founded in 1986; it covers the whole of Kent, with the 'Hi' initially standing for 'hearing impaired'. The charity has a small resource centre here in Canterbury (at 46 Northgate) and a larger centre in Maidstone.

John was appointed Chief Executive of Hi Kent in October 2004. During his career John has worked in local government and for the European Parliament. Under John's leadership, Hi Kent was awarded the Queen’s Award for Voluntary Service in 2007.

Deafness is an 'invisible disability' - in that it can be difficult to tell at a glance whether someone is deaf or not. But the number of people affected is actually quite large. John opened his talk with the worrying statistic that one in five people has hearing loss. According to his calculations that would approximate to 350,000 in Kent alone. Deafness is more common in those over 50 years old, so in Kent the numbers are likely to go up over the next few years as the number of people over 50 years old grows. On top of this, it's estimated that one in ten people has tinnitus - a condition where people hear noises (such as buzzing or ringing) that aren't caused by an outside source. This can be quite disturbing or unpleasant for those who hear the noises constantly or very loudly.

Hi Kent runs around 260 free hearing aid support clinics in Kent. In these clinics those with NHS hearing aids can receive free tubing and new batteries (if needed), and they can also have their aid cleaned. The clinic in Canterbury is held at the Northgate centre every month. (Clinics are also held at other locations around the city and in some surrounding villages.)

The charity also runs lip reading classes; these started around 12 years ago in Lyminge and have proved very successful. These classes help restore the ability to communicate to people with hearing loss. Classes also provide an opportunity for a lot of peer support. Hi Kent don't charge for these classes and priority is given to those who are already deaf or hard of hearing - though, if places are available, family or colleagues may attend. All the tutors are professionally qualified, with the Canterbury classes being hosted at Canterbury Adult Education.

Hi Kent also runs a tinnitus group in Canterbury and around half a dozen other groups around the county. The main purpose of these is to share coping strategies and help people support each other. External speakers usually give presentations at meetings.

The charity also supplies 'assistive equipment' - basically 'conversation aids' such as special phones, alarm clocks and flashing doorbells. For those over 65 years old Hi Kent now carries out assessments for assistive equipment on behalf of Kent County Council, which means that some people may receive assistive equipment free of charge. (Assessments are done on a needs, not means, basis under the Care Act).

John offered several tips during his talk - for instance, to talk clearly and if possible avoid talking against a bright light so that those who rely on following lip movements can see your lips. In meetings, if there are several people with hearing loss it may help to group them together so that speakers can address them straight-on. Battery operated devices might also help the hard of hearing to follow meetings and conversations; Hi Kent can give advice about these.

The Queen's Award that Hi Kent won in 2007 was in recognition of its work. The charity used to receive lottery funding of around £30,000 per year, but because so many other charities compete for this the funding is no longer availble. (Unfortunately it's proving harder and harder for smaller charities to get funding these days - it's said that 1.25% of charities get 68.5% of funding). Instead, funds to run Hi Kent are raised on a more piecemeal basis. This makes Hi Kent very dependent on donors and volunteers. Indeed, the staff and volunteers at Hi Kent work very hard to carry out all of the charity's various activities.

Picture: John Clayton from Hi Kent speaks to our members during our lunch meeting. Picture credit: Rotary Club of Canterbury.