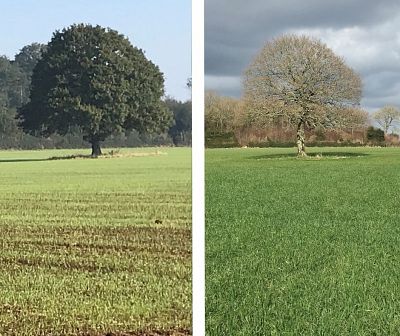 There was plenty of "food for thought" (as one audience member described it) when local farmer John Haffenden came to speak to our Members the other day. Some of the things he said really made us think!

John was introduced to us by our President Stephen Thompson, who has known him for many years. He and his wife Elizabeth look after their farm in Stelling Minnis, dealing with cattle, the planting of crops, and arable spraying amongst many other tasks. Their arable work concentrates in the specialist area of seed production: producing seed (grass, wheat, oats, beans and potatoes) for other farmers to grow.

John was previously Chair of Stelling Minnis Parish Council as well as Chair of Wingham Wheat Club. Currently, he is Chair of Minnis Managers, a Trustee of Minnis Common, and spends his Saturdays with work parties maintaining the unique character of the Minnis. Fed up with the ill-informed pieces about farming in the Parish magazine he started writing a “Farmers Notebook” section in the magazine - something he’s done every month since for the last twenty-odd years. So successful are his articles that he now writes for six local parish magazines!

John started his talk by telling us the real reason he started writing: he’d been complaining to a local farmer about some of the things he’d read, when the farmer had retorted "well rather than sitting and grumbling, why don’t you start to communicate?" So that’s what just John did!

John told us that the talk he was giving us was very different to the one he’d planned to give back in September (when he was originally due to speak to us). The reason? The war in Ukraine. “It’s going to change everything - not just agriculture," said John. He pointed out, for example, that Ukraine and the surrounding region areas produce 60% of the world’s sunflowers. That's important because those flowers are used to make cooking oil - so a change in the availability of sunflowers will affect the availability of oil, which in turn will have impacts elsewhere. Similarly, 14% of the world's wheat comes from the region. Although we don't import much of that here in the UK, it is exported to Africa. "I cannot see how that's going to happen now," said John, fearing Africa may have a wheat shortage; the wheat will have to be sourced, elsewhere adding to pressures in the market.

We learned that commodity markets had responded swiftly after the Russian invasion, with futures markets adding 50% to the value of grain. Wheat has doubled in value since a year ago; rape seed that was previously sold at £600/tonne is now £1000/tonne. However these high prices are more than offset by the increased cost of things such as fertiliser, fuel and electricity. Inevitably that means costs will also go up for us, the consumers. Farming – and every other business – is now entering "uncharted waters", with these input costs going up dramatically. "We can only hope that output maintains its current levels" he said. "It's a worrying time all round," John soberly pointed out.

Drawing parallels with defence spending, John believes there has been chronic under-investment in agriculture for years - "Food security has long been forgotten". The population of the world is expected to be 10 billion by 2050 - but land is a finite resource, and rising sea levels, depletion of land area for food, and many other factors are putting additional pressures on food production. In the last six years we learned that around 224,000 hectares of land in the UK has gone to developers. This, with additional land lost to solar parks and land used to grow feed stock for biodigesters, equates to around 3% of productive land area. "This trend simply has to stop," said John, adding "in effect we’re having to produce more from less!"

Delving briefly into history, John reminded us that since the Second World War farmers had been supported by government subsidies, and the European Economic Community (EEC) had aimed to balance supply and demand. However, Brexit has removed the EU safety net that farmers had had, and the UK government cannot provide that. Moreover, new trade deals with countries with huge agricultural potential is a threat to local farmers. "Imported foods do not have to meet the food standards we have to meet. Here in the UK – and the EU – we have some of the highest standards in the world". This import from overseas will have a knock-on effect in terms of animal welfare too.

Interestingly, John showed a slide with a lot of logos that he referred to as a "rogue's gallery" of organisations etc. that are not helping UK farmers. He even singled out the BBC's "Countryfile", which many of us think of as supporting agriculture, for some criticism; he says the programme often sanitises farming and doesn't show the "real reality of farming life". Instead, he says "Jeremy Clarkson's programme has done more for farming in five episodes than Countryfile has done this century".

He also spoke about the "no meat, no beef" movement, highlighting how the meat replacement, soya, for instance, is one of the biggest single causes of deforestation in the Amazon. Deforestation and burning has meant that last year was the first year that the Amazon actually gave out more carbon than it absorbed. Moving on to talk about the dairy milk alternative, almond milk, John informed us that most almonds are grown in California – which is officially a drought area. Yet EACH nut requires around 7 litres of water to grow - and then of course the almond milk needs to be industrially processed, packaged and transported to us.

Turning to the topic of planting trees – John said, in his opinion, "this is a misguided policy". While the Amazon may be seen as the lungs of the world, "that’s because it's a tropical rainforest with green trees absorbing carbon all year round”. John suggested that in a temperate climate such as ours, arable crops are better for fixing carbon. He showed a slide (see picture) to illustrate his point: one side showed a September scene, with green trees in the background and an arable crop in the foreground - all with carbon-fixing, photosynthesising greenery. However, the other side of his slide showed the same scene a few months later, in March. The trees had no leaves, and just the green crops were left. "For 5 months of the year the trees do nothing [in terms of fixing carbon]," he said, while the crops keep doing the job all year round as they turn carbon dioxide and sunlight into food through photosynthesis.

We also learned about the downsides of offsetting carbon. Nowadays a lot of big business offer to offset their carbon footprint by planting trees - but they do this by buying flat areas of farmland. "There is a place for trees," said John - "but this should not be in large, flat areas where, in our climate, the soil should be producing food. We cannot eat trees," he said.

John also spoke about mixed messages coming out from different government departments - for instance, over the restrictions on spreading organic manures vs. looking after the soil.

Finally, John reminded us that we are not powerless in this situation. "There is something that you can all do – because you all are very powerful and influential," he said. By this he didn't refer to us as Rotarians - but us as consumers. "The choices that you make are not lost on sellers," he said. He suggested we should all try to eat locally-sourced foods – better for us and for British agriculture. “Try to buy local – such as from farm shops”. Showing us a slide with various foods labelled with a Union Jack, he also asked us to look out for these logos as they were supporting British agriculture. But he warned us not to get fooled by seeing "GB" on a food item – the “GB” only refers to where the last stage of production takes place (a chunk of cheese may be produced overseas, for instance, but use a GB label as it is cut and packaged in the UK).

Ending his talk with a round of questions, John received a warm round of applause for his excellent presentation. We suspect that talking to the likes of us has been his next adventure in communication.

Picture: The two pictures of a tree in September and March that were shown by John during his presentation. Picture credit: John Haffenden/Rotary Club of Canterbury.