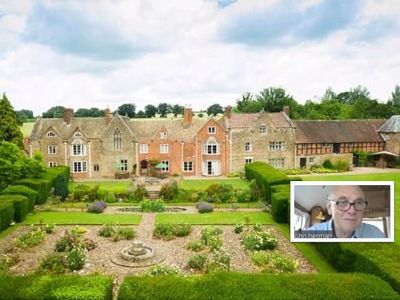 With many people still staying near home, it's nice to hear about other parts of the country now and again. At a recent meeting we learned about the history of Broadfield Court in Herefordshire from one of its current owners, John Herman.

The county of Herefordshire is in the West Midlands of England, just north west of Gloucestershire. Broadfield Court is a grand grade II * listed house with plenty of historical links that's situated there.

John was introduced to us by Rotarian Brian Dobinson - the two men first met around 40 years ago when John was one of Brian's clients; they've kept in contact as friends ever since. Brian told us that he'd been surprised when John had told him he'd bought a mansion in the Herefordshire countryside despite John having no intention of living there himself!

John picked up the story of his purchase...

For some 10-12 years John's training company had been using a 3-storey townhouse in Rugby as offices; the company had then relocated to an old school, leaving the 3-storey house empty. In the meantime, John had gone on holiday to Servan in France and enjoyed the time there; that visit had inspired him to convert the house into a boutique B&B on his return to the UK. This ran for a few years.

In the meantime, John's daughter and husband, both of whom had high-flying corporate jobs, had grown weary of corporate life in Birmingham. Both were looking for a new challenge. Collectively, they decided to look for somewhere to renovate and run as a business. After a year or so of searching the family finally found Broadfield Court.

Broadfield Court has a unique history; the main house sits in a 1000-acre estate (although the family only bought 22 acres). It was described as a "manor" in the Domesday Book (the famous survey carried out in 1086 by order of King William the Conqueror). At the time the house was in the possession of a Norman knight. Records suggest that before the Norman Conquest, the house had belonged to a nearby Abbey. In fact, it'd housed a convent of nuns. That in itself proved quite a story as at some point in history the Abbess had been abducted and held by Syven, the then Earl of Herefordshire!

The property had passed through various hands before being owned by a gentleman called William de Broadfield, after whom it got its current name. William had taken the side of Simon de Montfort, 6th Earl of Leicester - the opponent of King Henry III of England who, for some time, had ruled the country. De Montford died in battle and William de Broadfield's land was taken over by King Henry III. However, the land was returned to John, William's son, some years later.

John de Broadfield acquired lots of land and made some changes to the house. In the 14th Century John's wife had a chapel added to the house. John became a person of local fame - so much so that a stained-glass window in a local church had featured him; sadly, this was destroyed during the reformation.

Once again, the property changed hands a number of times before being sold, in 1824, to a firm of solicitors for £11,000. Just a year later the firm sold it on for £17,000 to a John Burchall. This John carried out further renovation and restoration, resulting in the house eventually taking on the appearance of a gothic mansion with a number of gables and gargoyles.

John Burchall's descendants lived in the property until the 20th century. Records show that at one time a 68-year-old John Helm (Burchall 's grandson) lived there with his 39-year-old-wife, Laura, and two young children - Joan, aged 6 years and another John, aged 2 years. (The preponderance of the name "John" among owners & residents did not go unnoticed by the audience!)

Interestingly, records show that during the First World War the grounds were used to grow poppies - for the morphine needed to treat the injured.

In 1930 the property was sold to Frederick Carnegie Romilly and in 1968 it was bought by an accountant by the name of Keith James. Keith rather fancied himself as a gentleman farmer - probably as a result of his experiences during the Second World War. It seems that during the war Keith had been captured in Italy and then sent to a prison camp. He and others had somehow managed to escape the prison camp and had lived in the local hills. There, they got on with local farmers and landed up working on the farms. One farmer had a vineyard which Keith worked on; during this time Keith promised himself that he would have a vineyard on his return to the UK - which is what he did at Broadfield.

The house is a mix of structures thanks to the changes made to it over the years. Most of it is timber framed and faced with red bricks. There are six gables at its south side with some interesting gargoyles (which John shared a picture of). Parts of the mantlepieces in the main house seem to be original - though other parts, with carved Tudor roses, seem later additions. The house overlooks a formal rose garden and has extensive lawns and surrounding woodland.

Broadfield Court took the family around 18 months to renovate; during this time, they worked closely with a conservation officer to maintain the historical integrity of the property. The family was keen to renovate with a "light touch" - but the plumbing and heating needed to be robust, given the plan was to use house (and grounds) as a wedding venue. All the rooms are now complete and tastefully decorated, in keeping with the house's history. There are still some interesting "tasks" in hand, including an unrestored attic with bowed ceiling, a number of outbuildings...and a mysterious safe.

Currently, there are around 14 acres of vines on the estate. John and his co-owners are exploring the possibility of making wine - they think they should get around 300 bottles. (Wine was made there just a few years ago - in fact there were 6 varieties coming from the vineyards.)

The house is now fully established as a wedding venue - the property is licensed for six areas, including some woods. John showed some lovely pictures of the house and gardens in use for events. Covid-19 has clearly disrupted this year's events - but the venue is proving popular with "staycationers", particularly as the area is so tranquil. John is hopeful that events will pick up again and is looking forward to next year, which he anticipates being a busy one.

You can find out more about Broadfield here.