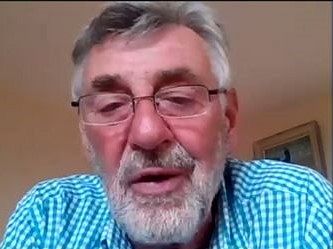 Many of us remember buying freshly caught fish locally - but that's not so common these days. Our Members learnt about some of the reasons for this from John Nichols, Vice Chairman of the Kent and Essex Inshore Fisheries and Conservation Authority.

It was a great pleasure to welcome John to our meeting. John, who is also Chairman of the Thanet Fishermen's Association, regularly gives talks on a number of topics related to the fishing industry. Ours was his first ever Zoom meeting and it was quite an unusual experience for him not to be able to interact as he might normally do with the audience.

John has been associated with boats and fishing for a long time. He spent many of his earlier years working as an apprentice timber boat builder, helping to build commercial fishing vessels. From there he went on to build his own vessel and, as he recalls clearly, on the 23rd August 1972 he went to work for himself. Since then he has worked for a number of organisations and claims to have almost "done everything on the water!"

In his detailed talk, John described how the local fishing industry has changed quite dramatically during his lifetime, and how things have become more challenging for fishermen. These days, he said, the life of a fisherman is very much one of "feast and famine".

At the time that John started in the fishing industry things were very different. There were many large vessels involved in fishing based in Folkestone, Ramsgate, Whitstable and Queenborough. Ramsgate used to have some very big trawlers - around seventeen-or-so 50-foot vessels. Now, most of these have gone, just leaving some gillnetters, potting boats, and smaller boats and fleets, such as a good cockle fleet in Whitstable. Only a few of the old fishing families remain. There are roughly 60-80 full time boats these days - about a third of that from 2 years ago and a small fraction of the number of boats 50 years ago.

We learned that there are many factors behind this decimation, such as a lack of fishing quota [meaning there is overfishing, so depleting the fish supply] and difficulties getting suitable crews for the boats. There are very few new entries and the average age of a fisherman is now over 50 years.

The fish species in the area have also changed dramatically - especially over the last 10-15 years. Before, around 95% of the annual turnover consisted of cods. A small boat could easily catch 1-2 tonnes a day and the number of nets actually had to be limited as otherwise there would be too many fish to handle. There used to be a time when a wide variety of fish would be caught locally - including bass and turbot (known as "curios"). But the situation changed "overnight" - not, as some might suspect, due to overfishing, but due to a sudden change in the type of plankton [on which the fish feed].

Where once there was a lot of Dover sole to be fund in the Thames Estuary, this fish population is thought to have been affected adversely by Dutch steamers. Unlike local boats, these steamers have the capacity to go out in all weathers. Moreover, they catch fish using electrofishing; while this technique just shocks the larger fish, it actually kills small fish and the lugworms and buttercup mussels that the other fish feed on. As John says "the Thames Estuary is now a sorry place for Dover sole".

Another factor that affects fishing is sewage. Fifty or sixty years ago this wasn't a big problem, but now effluent contains many things that are hugely detrimental to fish. One of these things is the many medicines that we use (and pass). Birth control pills, for instance, contain high levels of oestrogen. Additionally, as Thanet has grown in size, sewage now needs to pumped out to sea 24 hours a day, meaning that the amount of sewage has increased substantially. John also worries about the hundreds of gallons of bleached pumped out on a daily basis; it is something he plans to campaign about.

Another factor that affects fishermen is the weather; this limits how many trips they can do – usually 2-3 days per week at the most. An easterly wind blows for 1 month; although large boats can cope with this, small boats cannot. High winds are tough to handle and John told us that at some point “everyone has been frightened…and everyone has been seasick”. Sadly, John informed us, he’d lost friends at sea.

According to John, “the Thames Estuary is a very poor place for fish stocks at the moment”. Once upon a time skate used to be available in abundance. This is no longer the case because it is a low value fish. “Everyone loves bass,” says John. Although there is plenty of it still, there are no quotas so it is not divided fairly.

We learnt from John that the main ways of catching fish these days are gillnetting (which selects fish by size), micronetting, and line caught fish. The latter works well in clear water, but not in the “thick” Thames Estuary water. Most of the local fishing boats these days use micronetting [i.e. they use a lightweight net that limits damage to the sea bed].

Cocklers still do well, and the Kent and Essex cockle fleet is said by John to be one of the best-run and regulated in the world. John describes the cockles as “a beautiful product”. There a few whelk potters; after processing [transport is expensive, so it’s important to reduce weight], the Whelks are mainly exported via King’s Lynn or Ireland to South Korea or Ireland. There is still some crab and lobster fishing that takes place from Folkestone, Dungeness and a little in Ramsgate.

John is currently working with marine management and DEFRA [the Department for Environment, Food & Rural Affairs] on the regional management of fishing. This is because different species of fish predominate in different areas. For example, Rye is very good for scallops, cuttlefish and plaice. On the other hand, the west country is best for cod, haddock, pilchards, sardine and mackerel. Here, mackerel is difficult to catch. There is a little bit of herring in the winter, but much of this goes to the pet food market and to zoos. Nowadays there is not a lot of market demand for herring and sprats etc.

John would like to increase the quota of fish on our doorstep. He says it’s no good giving a quota for haddock here as this is not what’s caught locally. The same thing applies to prawns. Instead, he would like to see quotas for skate and Dover sole – taking away the quota from Scarborough or Whitby. “We catch what comes to us,” says John, “because we are a non-nomadic fleet; most do not work more that 25 miles away”.

Next, John moved on to talk briefly about conservation. We learned that fisheries are strictly controlled. “Big Brother is always looking at us,” John quipped. Boats can be stopped at any time “and we are,” said John. We learnt that very soon all fishing boats will have to be fitted with a tracking device so that the authorities know where they have been. Natural England and the Environment Agency have a big say over fishing – this is because birds feed on the fish.

In terms of conservation they work to two key principles: (a) minimum landing size and (b) mesh sizes. The latter have been increased over the years as “small fish are no good to anyone”. The fish must have an opportunity to breed. This observation leads John to refer to fishermen as “farmers” or “custodians” of the sea; they know they “must leave something for tomorrow,” he says.

Finally, John gave us a few tips about where to buy fish, encouraging us to support our fisherman and the smaller local shops. Queenborough and Faversham were good bets – and although there isn’t a great deal of variety, Whitstable has some lovely local fish fresh off the boat on a Saturday morning. John also mentioned a chap called Bluey who smokes his own fish. In Broadstairs, we learnt there's a great fish shop supplied by 17 different boats! There is also Jenkins in Deal and a few sellers at Folkestone Harbour, as well as at Hythe and Dungeness. John also suggested looking at the "fish local" campaign website (https://fishlocal.org/) which allows fishermen to sell direct to the public. As far as the supermarkets is concerned, John told us Morrison’s has a good wet fish counter. He certainly suggested we do our best to buy local British fish and so help the fishermen in our local community.

John's talk - which added to a set of events and actvities organised by our President this year around the teme of "the food we eat" - ended with many questions from the audience, a vote of thanks, and a warm round of applause. We know our members will think twice about the fish they purchase in future.