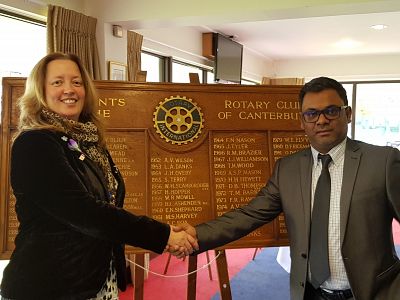 Kailash grew up in Mauritius until he was in his twenties; he later moved to the UK and is currently settled down here in Canterbury.

Kailash passed his A levels at John Kennedy College in the 1990s. (At the time he was very sporty and played football for his college as well as for his town. He also did karate until he was 17.) His first job was as a trainee accountant at an accountancy firm in Port Louis Mauritius called Bacha and Bacha. He worked there for almost three years before leaving for London to pursue further studies in accountancy.

Kailash started his ACCA course at Emile Woolf College London. After two years of studies he started working for Lall Ondhia Ltd, an accountancy firm in Manor Park, London, as part-time, trainee accountant. He gained experience in accountancy there, working for the practice for almost five years.

Kailash qualified as a Chartered Certified Accountant in 2004 and in 2005 he joined Wagstaff Rowland & Huntley in Lewisham, London as a Senior Accountant. He met his wife, Chaya, in February 2006 and they got married in the August of that year. They then bought their first flat in Plumstead, London, where they lived for a year and a half. They had their first daughter, Keira, in July 2007.

In 2008 Kailash got a job in Brighton as a Manager for a firm called Hilton Sharp and Clark. He and his wife then decided to move to Eastbourne where they bought a house and lived for five years before moving to Canterbury in July 2013. They had Karisha, their second daughter, and Yuvashi, their third daughter, by then. They all loved Canterbury from day one and Kailash’s daughters have made lots of friends in-and-around Canterbury, via school, the ballet dance club and Appeti Tennis (when playing tennis).

Kailash took over Ethos Accountancy Solutions Ltd as a practising Partner and has now been there for four and half years.

Kailash decided to join The Rotary Club having been involved in (and at one time president of) a youth club in Mauritius in his earlier days. He's keen to get involved in helping the community in some way in Canterbury.

We are delighted to welcome Kailash on board and look forward to working with him on Rotary activities.