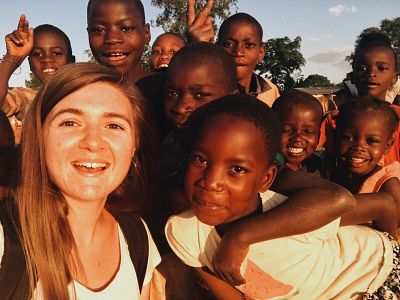 It was a great pleasure for our Members to hear from one of our Millennium Scholars, Katie Washington, about her work in Malawi with Action International Ministries. Katie opened our eyes to a very different way of life out there.

Katie was introduced to us by Rotarian Roger Power, who Chairs the Trustees of our Millennium Scholarship Trust Fund (MSTF). The Fund was set up to "advance the education of young people who live, work or study in Canterbury and to instil principles of good citizenship by providing financial assistance to those who wish to give service to a local or overseas community through a scheme or project run by a nationally recognised charity."

Roger reminded us that he had first met Katie through Rotary around 5 years ago, while she was a 6th form student at Archbishop's School in Canterbury. At the time she was about to travel to South Africa in order to do some charity work there. Eighteen months later Katie was in touch with us again, as she was planning to do some voluntary work out in Malawi with Action International Ministries. Since Katie's first meeting with Rotarians she has successfully completed a degree in geography from Leicester University and has now completed the Malawi trip she'd planned - though, sadly, it was curtailed because of Covid-19.

Katie started her talk with a picture of Malawi on the day that she arrived there. "It was September, the dry season - but very beautiful," she said. Her first destination was a small rural village community called Kanyimbo, meaning “little song”. There, she worked with young people and women's groups.

It turned out that Katie was one of just two people working out there for the charity; there was another girl called Amanda (two other girls joined them, as well as the mission directors at the end of January). Katie and Amanda would work together with the locals. In between classes a fair amount of time was spent playing games and getting to know the individual villagers, preparing meals and eating together. "Learning about the local culture is very important," Katie told us, adding "and I was so warmly welcomed by everyone I met".

After the first two months Katie started her own youth groups in Bawi and Mlangeni. Each group had around 80 people; they would sing together and she would teach - mainly bible teaching. "They were all so enthusiastic," said Katie with a happy smile. Although a Christian country, many of the people, especially those that she worked with, were very poor. Making ends meet was hard enough. Not many had bibles, so Katie raised money for these.

Christmas in Malawi was a very different experience for Katie: "It was my first time away from home - but it was a very special and I had a really lovely time," she remarked. The organisers has raised money for "food buckets" - basically large, lidded plastic buckets of food - that were distributed to orphans and widows. Showing us pictures of the recipients with their buckets, Katie told how orphans in that area are placed with widows to  be looked after; it seemed to be a great arrangement that worked well for both groups. However, widows were often the poorest in the village and so relied on the support of fellow villagers.

Katie also told us about "Day Conferences" that she helped with that get the youth together. Showing us a picture of her playing games with the children, Katie commented "I really love this photo!"

Next, we heard about the feeding programme that Katie was involved with during January - March this year. In this programme meals are provided three times a week to those that need it. The programme is run locally and the food also sourced from the local area. Again, recipients are orphans, widows and other vulnerable people. We learned that January - March is known locally as the "hungry season" as stocks from the previous harvest start to run out and the next year's harvest is not yet ready. The scarcity of food leads to a hike in prices, making food even more unaffordable for the poor.

Food was distributed via 19 centres to around 2,000 children and widows. Lists were prepared of the children that were to be fed, but often children would turn up who were not on the list. "It was tough to see children coming for food," said Katie. Thankfully, there would often be enough food to go around, and the village leaders would give a lot of time to the youngsters.

Katie showed us more pictures from her trip and told us of various adventures - including motorbiking out to one village, going past the crops which had started to grow again with the start of the rainy season. We found out that Katie had learned enough of the language to have a basic conversation, get directions or buy something at the market. There was a picture of Esme, a local lady that Katie worked with. "She was like my best friend out there," said Katie.

Katie ended her talk by thanking our Club for its support. "I had such an amazing time and learnt so much while out there - it was very sad that my trip got cut short because of Covid-19."

There were quite a number of questions from our members at the end of the talk, during which we learned to say "welcome" in the local language (Takulandilani) and got some perspective of how the locals view us, here in the UK. Living in extended families and large community groups, we learned they found it difficult to imagine us all living inside our homes and not living and sharing with our neighbours; we also learned how they were thankful for life each day. "There is a lot we can perhaps learn from them," said one of our Members.

Picture: Katie with some of the youngsters that she worked with while out in Malawi. Picture credit: Katie Washington/Rotary Club of Canterbury.