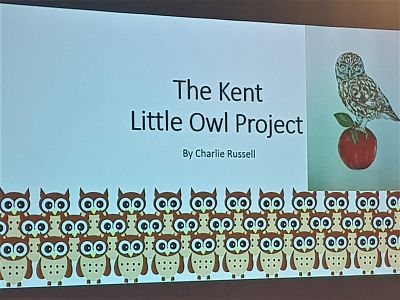 It was a delight today to hear about a project aimed at conserving owls - the Kent Little Owl Project.

Few of us had heard about the project before, and it was certainly good to hear from someone young, passionate and enthusiastic about their work.

Charlie Russell is currently studying for a degree in Wildlife Conservation at the University of Kent. He's especially interested in birds of prey, having volunteered for about three years at the International Centre for Birds of Prey, a Gloucestershire-based charity that claims to be 'World's oldest dedicated Bird of Prey Centre"; earlier this year it celebrated its 50th Anniversary with Princess Anne and other notable people such as the comedian and bird enthusiast Bill Bailey attending its celebrations. The celebrations also included the launch of the Vulture Alliance, which is a worldwide effort to save vultures, one of the most threatened of all bird groups.

Charlie's studies are based at the Durrell Institute of Conservation and Ecology (DICE), part of the school of Anthropology and Conservation at the University of Kent at Canterbury. The Institute has played a role in saving or conserving kestrels and some other animals around the world, such as the Golden Lion Tamarin. Charlie's involvement with the Kent Little Owls Project started when initially challenged to put up 20 nesting boxes for the birds.

As the name suggests, Little Owls are small owls; they are quite endearing, with big eyes and a tendency to bob up and down if alarmed. Although not indigenous to the UK (meaning they don't have the same protection as some other species of owl), they have been in the UK since Victorian times. Back in those days many households kept a pair of birds in the kitchen to catch cockroaches. Around 40 birds were released near Tonbridge and at their peak, in 1984, there were around 1,105 pairs in Kent.

The birds were very suited to our habitat and seemed to fill a vacant niche in our ecology. Sadly though, in recent years the Little Owl population has plummeted and it's thought only around 400 pairs remain in Kent.

Charlie's aim with the Kent Little Owls project is twofold - first, to support Kent's population of Little Owls. Second, to increase the use of sustainable land management in Kent. Charlie also hopes to glean more information on why the numbers of owls are declining so rapidly. Various possibilities include the use of pesticides (which reduce the abundance of insects on which the Little Owls feed), the loss of habitat/nesting sites (due to a decrease in the number of trees with suitable cavities) and a decrease in the number of owls reaching a mature breeding age. Habitual farming practices may also have had an effect.

Although the initial aim was to put up 20 nesting boxes, Charlie already has plans to put up 50 this year across a number of different sites, primarily orchards and then other agricultural areas. He and his colleagues plan to monitor the birds and carry our relevant research on the owls and some surveys on their prey, including moths and small mammals. This may help develop/improve agricultural practices.

They have been working with the Kent Sheds project to build nest boxes and they hope to contact box owners in the event that the boxes become occupied and the birds are 'rung' as part of the owl survey.

Charlie is keen to talk widely about his project; he's already been back to his old school and has plans to run educational workshops in order to get schools involved in the surveys. He also plans to publish a quarterly newsletter from March which will be distributed free of charge to anyone that's interested. Through that he hopes to increase awareness about the project and maybe 'start a little spark in someone' - just as someone once started a little spark in him.

Our Club & President donated £130 to the project which will be used to build boxes for the owls; Charlie hopes to get between 10-15 boxes from this and plans to let us know if any get occupied. We will of course pass on the news!

Charlie will soon be going to South Africa for a year to be part of Vulpro, an initiative focused on the conservation of vultures. Us Rotarians were also interested to know that Charlie was once involved with Interact, Rotary International’s service club for 12-18 year olds.

Follow/like them on Facebook: The Kent Little Owl Project

Donate via the Go Fund Me page: https://www.gofundme.com/kentlittleowls

Contact them if you have a farm or orchard suitable for a nest box: kentlittleowlproject@gmail.com (which is also the address to contact them with any queries).

Click on the following for further information about each: