Insight from the Inside: The Kent MS Therapy Centre 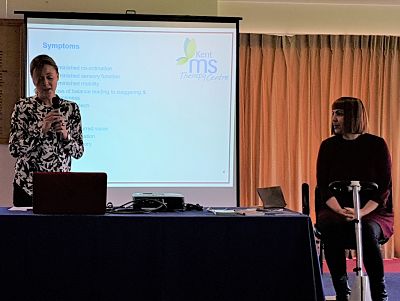 We were delighted to have Moira Mitchell and Nancy Jagdev visit us at our lunch meeting to talk about the Kent MS Therapy Centre; many readers will be aware that our club donated some funds recently to the Centre. Moira is Head of Fundraising, while Nancy is a Centre user who has multiple sclerosis (MS).

Moira started her presentation with some thought-provoking statistics and information about MS - approximately 100,000 people in the UK have MS, and around 5,000 people are newly diagnosed with the condition every year. It’s a complex and chronic illness, with many unknowns that researchers are looking into.

Moira then introduced us to the Centre, which she described as ‘a hive of activity’. The Centre is the only purpose-built facility of its nature in the whole of Kent. The original Centre was established in 1984, based in Merton Lane North. Rotary and many others contributed to the building of the new, £1.5 million facility which opened in 2015. The centre offers therapies ranging from hydrotherapy and physiotherapy to Indian head massage and reflexology. It also has a hyperbaric oxygen therapy chamber (one of the few places in the South East to offer this) that is believed to help alleviate some of the symptoms for some people with MS. There are also four therapy rooms, and members have the opportunity to mingle with one another in the kitchen and seating area. On the 3rd Saturday of every month the Centre hosts a coffee morning.

Members often come through referrals; there is a nominal £15/year membership fee and then members can donate towards treatment (though for those in financial difficulties the treatment is offered free-of-charge). One user stated: ‘Coming to the Kent MS Therapy Centre helps me to live in spite of my MS and not for it’.

The facility is open on weekdays and for part of Saturday. Operating a facility such as this is expensive – the Centre has annual running costs of £500,000. It’s not government or NHS funded (though it does apply for grants). Although this gives it a level of independence, it has to run on funds that come from the public, from fundraisers and organizations such as Rotary.

People can help the centre in two main ways – by raising funds and by volunteering to help with the Centre’s activities. Moira is especially keen to hear from undergraduates and postgraduates who would like to volunteer some of their time and at the same time add to their work experience.

Nancy, originally from Essex, gave a very personal account of how the Centre has helped her with her MS. Initially suffering from pins and needles, Nancy went on to eventually see a neurologist who diagnosed her condition following his examination in 2012. Although ‘relieved’ to have a diagnosis at first, for her it was difficult to come to terms with the illness at the beginning. After her diagnosis Nancy kept working (as a teaching assistant), but had to stop when she struggled to do the tasks she was supposed to help others with. After Nancy moved to Kent she started to go to the Centre three years ago with her boyfriend Christian, who also has MS. She described it as ‘the most amazing place’ and spoke with great enthusiasm about the therapies and support it gives. So far she has had massages and acupuncture and goes to yoga – these all help with flexibility and mobility. She will be starting hypnotherapy next week. Even if not doing any therapies, Nancy spoke of how the Centre is a good place ‘just to meet others’ and learn ways to adapt. She also highlighted how the Centre can help when there is relatively little for those with primary or secondary progressive status. Nancy spoke with great positivity, saying she has a good life and believes that research will help find out more about MS and how to treat it.

Both Nancy and her boyfriend are volunteers themselves – both at the centre and in running a local group called YUMS for young people with MS. Her boyfriend also runs a website for those with MS.

The Rotary Club of Canrerbury has supported the Kent MS Therapy Centre for many years. Recently we donated £400 which will pay for 10 sessions of counselling for someone newly diagnosed with MS.

UPDATE:  The Rotary Club of Canterbury will be providing the raffle prizes at a charity bridge drive at Littlebourne War Memorial Hall on Sunday 29th October 2017 in aid of the Kent MS Therapy Centre.