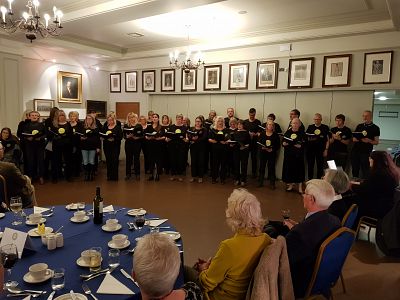 We had musical treat yesterday when the 'Lemon Zingers' came along to sing songs to us from the 1960s - with hits from The Beatles to the Beach Boys. Even more awesome, the singers waived their fee in lieu of a donation to the Blackbird Project.

The Lemon Zingers is a Canterbury-based choir that sings a variety of songs using vocal harmonies. They are open to people of all ages and backgrounds - and often raise funds for deserving charities and causes. They are so popular that some of their members come from as far away as Dover!

Led by their bubbly choir leader and pianist Lemon Otter (after whom they are named) the group warmed up a chilly November evening with their lively musical repertoire. The special guest event took place at the Pavilion, a slightly different venue to our normal meeting venue at St Lawrence Cricket Ground. In all, well over 30 Lemon Zingers entertained us with their singing.

Accompanied  on a keyboard by Lemon and with occasional solo lines from their members, the group kicked off the evening with the Beatles' 1965 hit 'Help!', followed by 'California Dreamin'', the song made famous by the American vocal group the Mamas and the Papas. The rousing sound of the Beach Boys' 'I Can Hear Music' was accompanied by some spirited 'clapping-to-the-beat' from the floor (which was full of Rotarians and their guests) before the Zingers sang another Beatles tune - 'Blackbird' (appropriate for the evening, given the very worthy project* that the group were supporting with their performance). Next up, we had 'Bus Stop' (often mistakenly called 'Under my Umbrella), the popular song originally sung by The Hollies.

Audience members were trying to guess each tune as it started - and initially there were some puzzled looks when the group started to whistle. The song, of course, was 'Georgy Girl', the hit sung by Australian folk group The Seekers. As Lemon announced the final song of the evening an 'Awwww!' was heard from the audience, many of whom had felt transported back to the 1960s by the music. "If we don't stop singing, you won't get any dinner," laughed Lemon.

The Zingers ended their performance with another Beatles track - 'With a Little Help from My Friends' - which had some particularly energetic singing from some of the Zingers and a bit of audience toe-tapping to the music. On behalf of our members the President thanked the group, with members and their guests giving a very warm round of applause. As one audience member said after the performance, "the cheerful singing and familiar tunes put a big smile on our faces!"

The Lemon Zingers had requested that we make a donation to the Pilgrim's Hospices Blackbird Project* in lieu of their fee, so our President was delighted to hand over a cheque for £200 to Lemon and the group.

*The Blackbird Project helps hospice patients "digitally capture the distinct voices of loved ones, enabling these voices to be present in the morning, the evening and even at 3am… whenever families and friends want to hear their voice" - it is a legacy project brought about by Sheena and Nick Jackaman in memory of their son, Ben, who died in 2017 at the age of 34; the project is carried out by Pilgrims Hospices and was launched this spring. As part of the project, facilitators will learn how to work with patients to record messages or other thoughts, words or music that patients want to record for their loved ones.

For more about the Lemon Zingers, or to join their choir, click here.

Picture: The Lemon Zingers entertain the audience of Rotarians and their guests with some up-beat tunes. Picture credit: The Rotary Club of Canterbury.