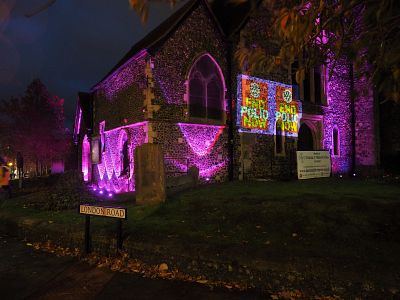 Together with the Rotary Club of Canterbury Sunrise our club lit St Dunstan's church purple in a joint venture on Saturday 24 October (World Polio Day) to raise awareness of polio and the activity of Rotary Clubs around the world to end polio.

The lights were switched on by the Presidents of both clubs. “This is a wonderful way to show our support while brightening up this dark evening,” said Rotary Club of Canterbury President Alan Mepstead. “Our united effort symbolises the unity of Rotary worldwide in trying to eradicate this disease,” added the Rotary Club of Canterbury Sunrise’s President, Chris Barnett. The lighting itself was overseen by PP Phil Abbott, who has been a member of both clubs. Members of the Sunrise club live-streamed the event via their Facebook page - quite a challenge in blustery conditions.

Polio is a potentially life-threatening or debilitating viral disease that once existed in 125 countries, including here in the UK. Many people remember of hearing about the iron lung machines that were used for those who were seriously ill. Thanks to a vaccine being available and the efforts to prevent polio through mass immunisation programmes, the number of countries that still have cases of wild type polio is now just two – Pakistan and Afghanistan. But the virus is still around, so ongoing vaccinations programmes and awareness-raising is important to keep case numbers in decline.

Rotary worldwide has spearheaded the battle against the disease through mass immunisation and health education programmes. The Bill & Melinda Gates Foundation generously matches every pound raised by Rotary with two from the Foundation.

The Rotary Canterbury Presidents were joined by other club members, though Covid-19 restrictions meant only a limited number of people could take part in the event, which was livestreamed through the Sunrise Club’s Facebook page.

Purple, inspired by the colour of the dye painted on a child’s little finger to signify they have received their potentially life-saving polio vaccine, has come to symbolise the fight against polio.