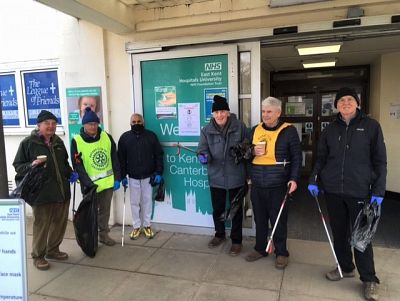 Responding to a request from Kent & Canterbury Hospital, a group of Rotarians from our Club, together with Peter Woolenough from Rotary Canterbury Sunrise and our Assistant District Governor Kevin Fielding, descended upon the K&C for a litter pick!

The Hospital recently contacted Rotarians, requesting help as the staff that would normally be litter picking were required elsewhere. So, ready as ever to try and help where we can, and supplied with “picking sticks”, gloves, masks and black sacks from the Hospital (but hindered by the wind which was blowing a gale), our Rotarians valiantly got to work yesterday.

Fortified by a nice hot coffee at "half time", the team managed to fill twelve large rubbish sacks with litter from the surroundings of the top car park alone - consisting of discarded old face masks, crisp bags, cigarette butts and - literally - dozens of empty gin bottles.

With thanks to Alan Mepstead for help with this report.