An open-air performance at Nonington of Macbeth 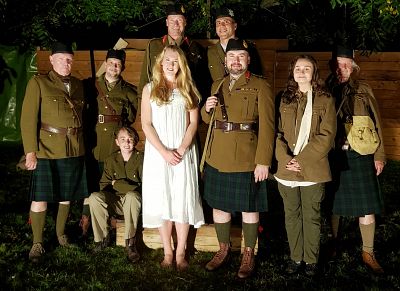 'Twas a muggy evening, lit by a moon in its first quarter, when Members of our Club plus their guests were transported to the trenches of World War I during an open-air adaptation by theatre company Primal Clay of William Shakespeare's Macbeth.

Rotarians and their guests gathered in the specially set up garden in Nonington, a village just part way between Canterbury and Dover, for the performance by the up-and-coming company.

Given the ongoing pandemic, chairs were set up in "bubble points" facing the "stage" - itself seemingly framed by the dark outlines of the trees. A number of "There But Not There" perspex silhouettes, lit up a glowing red, were positioned to the sides - tributes to “the fallen” developed by the artist and photographer Martin Berraud and purchased through funds raised in Nonington, led by Barry Rampton, to honour those who’d lost their lives in battle. The performance, in two parts, with an interlude, commenced after everyone had eaten the picnic they'd brought along. [Spoiler alert.]

The lights dimmed, the air was still and silent and all that could be heard was the occasional chirruping of little birds as Macbeth and Banquo, officers in the "Black Watch" Regiment, came across an eerie witch-like creature on their way home from a bloody skirmish on a WW1 battlefield. She hails Macbeth, dressed in military attire with kilt and weapons, as thane of Glamis, then thane of Cawdor and finally "King"... and so starts Macbeth's downfall as he falls victim to his own greed and ambition, spurred on by an even greedier, power-hungry Lady Macbeth.

In a series of four acts the cast took the audience from the battlefield trenches to Macbeth's Manor where, aided by his wife who prepares two daggers ready for him, Macbeth murders his guest, King Duncan, King of Scotland. On the arrival of nobleman Macduff, Macbeth kills the guards as if enraged - while the King's sons escape and get blamed for the murder.

Wracked by guilt Macbeth, now King of Scotland, descends into paranoia, jumping at every sound. Recalling another prophesy, that his friend Banquo's children will inherit the throne, he arranges Banquo's death.

Macbeth then seeks reassurance from the witch that he is safe - she confirms this to be the case until Great Birnam wood should rise against him. This he finds comforting; he feels even better when he hears "...none of woman born shall harm Macbeth."

Macbeth begins a reign of terror in which he slaughter's Macduff's children, making a bitter enemy of Macduff. But Macbeth, despite being tortured by the ghosts of those he has killed, remains certain of the prophesies and has no fear - until a young messenger announces that the woods are moving - Macduff's soldiers are using branches as camouflage as they move forward. Meanwhile, Lady Macbeth, tormented by the part she has played in the deaths and in deep mental anguish, confides in her doctor and takes her own life.

Macbeth mourns her death but battles on against Macduff - until he hears of Macduff's caesarean birth. He realises then that he is doomed, and so Macduff takes Macbeth’s life & cuts off his head. The play ends with Malcolm, son of Duncan, taking the throne.

The captivated audience gave a warm round of applause as the small group of performers took their bows; President of our Club Stephen Thompson thanked all of them, plus Rotarians Phill Abbott (producer, light, sound and set - as well as provider of gazebos, seating etc.) and Peter Hermitage (who helped organise the event) for the night's wonderful entertainment.

Picture: The cast gathered together for a photograph. Picture credit: The Rotary Club of Canterbury.