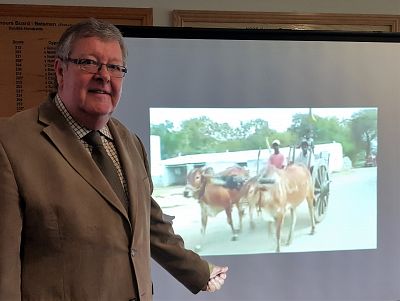 Today our club welcomed Malcolm Wagget to give a presentation about the Institute for Rural Health Studies, an India-based charity that provides healthcare to India’s rural poor.

Malcolm, who lives in Dover, became involved with the Institute after a long career in banking. While it’s a small charity, the Institute has big ambitions, and is involved with providing healthcare, improving access to healthcare, and conducting research. It was founded in Hyderabad around 37 years ago by two ladies – an American (Dr Patricia Bidinger), and an Indian (Mrs. Bhavani Nag). The Institute’s initial focus was research (specifically the link between socio-economics and health), but soon after it became known as a healthcare provider.

Malcolm showed us a fascinating video shot and developed by the team. It showed the work of two rural clinics, one in a place called Dokur, one in Kotakadra. Apparently the villagers – primarily the families of landless labourers – choose to go to the clinics “because they [the clinic staff] care”; it’s a reflection of the attitude of the staff to their patients. Mainly comprising of locals, the staff (and volunteers who join them from around the world) are “patient-centred”. The clinics provide health care, laboratory tests, and gynaecological support. There is also a pharmacy stocked with quality medicines bought at low prices.

The staff are proactive, seeking out patients rather than merely expecting patients to come to them. In the evenings they go door-to-door to check on child development (e.g. checking weight) and providing routine antenatal checkups.

The Institute is especially interested in women, especially destitute women and widows, who have particular struggles in life. The Institute currently has some land on which they plan to build a home once they have funds available.

Another area of focus for the Institute’s work is cervical cancer. This is the biggest killer of women in India; approx. 6% of women are diagnosed with cervical cancer – compared to approx. 0.1% here in the UK. Currently there are no government screening programmes, so the Institute has pioneered an innovative screening programme. In this, teams go from village to village to carry out screens. Simple cases are immediately treated with cryotherapy to kill the early cancer cells; thus treatment is carried out before it’s too late. Advanced cases are referred to other better equipped hospitals. Last year the Institute diagnosed around 400 cases, treating around 300 of these and referring the rest for surgery. The staff have published research on this and have been so successful that the Government has asked them to develop two more “test and treat” clinics.

One more area that the Institute works in is to provide “traveller’s aid”. To put this into context, one has to remember that villagers who are sent to the bigger hospitals in the city are scared and intimidated by the city; on arrival the bus stand is confusing for the inexperienced rural traveller, with buses coming and going, lots of hustle and bustle and a range of languages being spoken. Often the villagers are illiterate and lack the map-reading skills to get around the city on their own, and fall prey to touts who exploit their naivety to sell them services they do not need. The Institute has developed a traveller’s aid post which is manned by devoted staff to help such travellers. The staff also proactively seek out the sick and injured who might need help, providing basic first aid, referring on where needed, and giving counselling (free of charge). For this the Institute has won an international award.

The Institute also has counsellors at every government hospital in the area – these are science graduates who have received additional training in medicine. They ensure that patients and doctors understand one-another and also maintain patient records.

The Institute has, on occasion, raised funds for difficult cases. For example, one patient that they helped was a 12 year old girl with an arteriovenous malformation in her leg that put her at risk of bleeding to death. Her condition was treatable, but there was no government subsidy available and the girl’s family was too poor to afford care – in fact they were terrified that their daughter may fall ill. Another patient they helped was a 7 year old girl who had been bitten on the leg by a cobra; her entire lower leg was malformed and she had large wounds and ulceration. The Institute got orthopaedic and plastic surgeons to work together to provide treatment unavailable in government hospitals.

The work of the Institute is remarkable given they only have 17 paid staff; the rest are volunteers, including doctors from around the world who spend 2-3 months there on sabbatical. The team is also good at encouraging surgeons and other medical staff to provide their skills free of staff, meaning the Institute just needs to cover the costs of theatre time and other staff. In this way the Institute can provide more help than it might otherwise be able to.

In summary, the Institute wants to ensure that families “Do not fall victim to poverty related health problems”.

For more information about the institute, please visit their website.

Picture: Malcolm Wagget tells our Club members about the work of the Institute for Rural Health Studies out in India. Picture credit: Rotary Club of Canterbury.