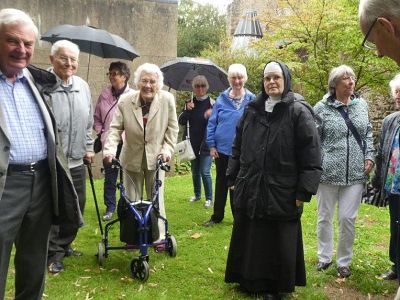 Malling Abbey was described to us as 'a delightful combination of old and new, with a stream running through it' - and that's certainly what a group of our Members, partners and friends thought when they went to visit it recently.

A party of 20 was privileged to make this visit, which was organised by our Vocational Service Committee with the invaluable help of Tony Weber, an expert on monasticism and a U3A (University of the Third Age) lecturer on the subject, who also guided our trip to Bayham and Battle Abbeys last year.

The Abbey is in the centre of the pretty little town of West Malling, near Maidstone, and was founded originally as a nunnery by Bishop Gundulf of Rochester at the end of the twelfth century. It functioned as a nunnery until Henry VIII’s Dissolution of the Monasteries in 1538, when the nuns bravely refused to sign the deed of surrender demanded by Thomas Cromwell. The most notable parts of the original nunnery still surviving are the tower, formerly part of a large church, which is similar to the one at Rochester Cathedral, and the gatehouse which dates, in part at least, from the 14th century.

Following the Dissolution, the site passed through the hands of a succession of secular owners, the buildings gradually disappearing and their materials being used for various buildings in the town. Other secular buildings were constructed on the site, including a mansion, now incorporated in the nuns’ residential accommodation.

In 1892, a wealthy woman bought the site, intending to return it to ecclesiastical use, and the present order of Anglican Benedictine nuns moved there in 1916. At the outset, there were 36 nuns on the site, but their numbers have now fallen to 12, with an average age of 72. In view of this, some two years ago the Diocese of Rochester took over part of the site including the Guest House, Western Range of adjacent buildings, former Pilgrim’s Chapel and Prayer Labyrinth in the grounds and has formed these into the St Benedict Centre, which now forms a very attractive place for groups and individuals (including secular groups) to hold meetings, retreats and the like.

We were met by Sister Bartemaus, who guided us over the parts still used by the nuns. These include the gatehouse, tower, church and cloisters. The original church has vanished, apart from the tower, and the present church was built on part of the site of the original in the 1960s. It is an extraordinary building, all concrete, and in the form of an elongated oast house. The roof (resembling an upturned boat) appears to “float” over the building as it is surrounded by glass windows, set at an angle to the horizontal, while the supporting walls are not vertical but flare outwards at the bottom. No doubt the architects, who included a gentleman named Maguire, were very proud of their bold new venture, but, distressingly, it began to collapse after a few years and supporting columns had to be inserted.

We were joined in the church by the Abbess, Mother Mary David, a humorous Canadian hailing from Niagara Falls, who explained the collapsing roof was not the only shortcoming of the church - the vast area of tiled floor and bare concrete walls make it very cold, and the acoustics for speech are very poor, while the 'congregation’ (should there be one) is housed in a sort of 'letterbox’ at one side from which they cannot really see those officiating (and vice versa). But it is listed Grade 2* and put some of us in mind of 'Paddy’s Wigwam', the equally eccentric Roman Catholic Cathedral in Liverpool. However, those of us who attended the short Nones service found the acoustics flattered the sung voice.

Mother David then took us to the cloisters, beautifully built on the site of the original with fully glazed arches - but we were assured they are still very cold. One side of the cloisters runs alongside the mansion and gives access to the nuns’ cells and, at its end, to the grounds. These are quite lovely, even on a rainy day, with lots of trees and shrubs, a small stream (with small waterfalls) which winds its way through, a prayer labyrinth and a large walled garden where the nuns grow their fruit and vegetables.

We took our leave of Mother David and Sister Bartemaus and went on to the Centre which is run by Tracey Jones, a jolly Northern Irishwoman. She served tea and biscuits and explained how the Centre operates, providing quiet rooms for groups of various sizes at what seemed a very reasonable rate of £12 per person per day (though guests have to arrange their own food).

The Abbey is not open to the general public, though it is possible to arrange a visit by arrangement with the abbess.

We found the trip very interesting and are grateful for all those who helped with our visit, especially those who showed us around including Tony Weber.

For more pictures of the trip, visit our Facebook album.