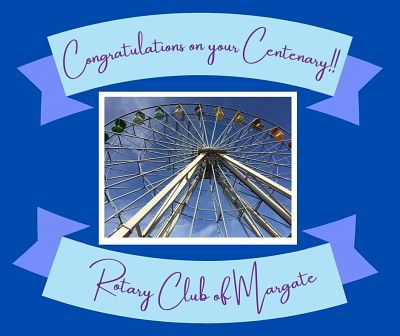 Many parts of the world will be celebrating Mother's Day today. But did you know our Club has a mother too - and that she celebrated her 100th the other day?!! Our congratulations to the Rotary Club of Margate on reaching its centenary!

It was a delight for a number of our Members including our President Alan Mepstead, President Elect Stephen Thompson and Past Presidents Harry Cragg and Mike Talbot to join our mother Club, The Rotary Club of Margate, in the celebration of its Centenary on Wednesday. The online celebration brought Rotarians (and some sons and daughters of previous Margate Rotarians) together in a joyous virtual celebration - spanning three continents, no less!

It was a true family gathering as we were joined by the President of the Rotary Club of London (David Johnson), Margate's "mother" club (and so, perhaps, our Club's "grandparent"!) and many other clubs sponsored by Margate (our "siblings"!)

David told us of RC London's pioneering spirit at the time of sponsoring Margate - and the remarkable number of new clubs it's sponsored. Chief guest and President of Rotary in Great Britain and Ireland, Tom Griffin, spoke of Rotary's history. President of RC Margate, Jeremy Voizey, told us how their club now has links to over 50 clubs in their family tree!

We saw a lovely little video that touched on the club's history but came right up to date with the club's impressive array of local and international activities. We were also treated to a little singing from the club's members, and an amusing video of a "ballet". Although the club reached around 80 members at its peak, it is now closer to 27 - but seemingly just as active as ever.

A number of Rotarians from other clubs spoke - including Alan, who congratulated Margate on its milestone and achievements and also reminded everyone of our own Centenary next year (a year which will also mark the centenary of the Ashford Club). Rotarians from India also joined us - at what must have been very late at night for them!

We give our heartiest congratulations to RC Margate and wish them all the best for the next 100 years!